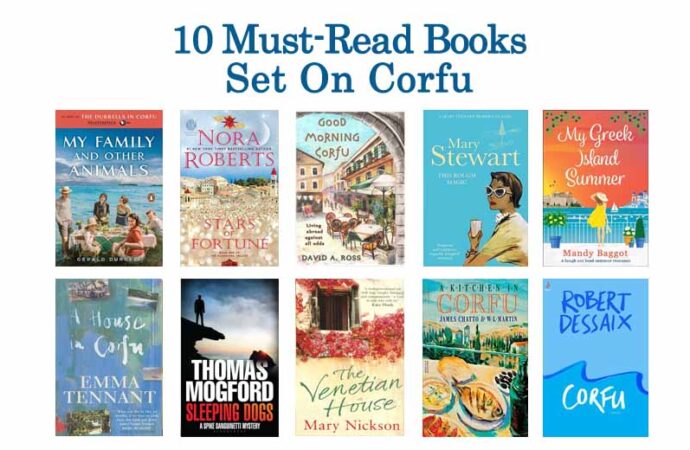 These 10 must-read books set on Corfu include memoirs, essay collections, cookbooks, mysteries, romances, and novels. From the UNESCO World Heritage Centre designated Corfu Town to Sidari, Paleokastrita, and many other beautiful Kerkyra villages, beaches, and landmarks, visit the Greek Emerald Isle with these books that take place on Corfu Island in Greece.

1. My Family and Other Animals by Gerald Durrell 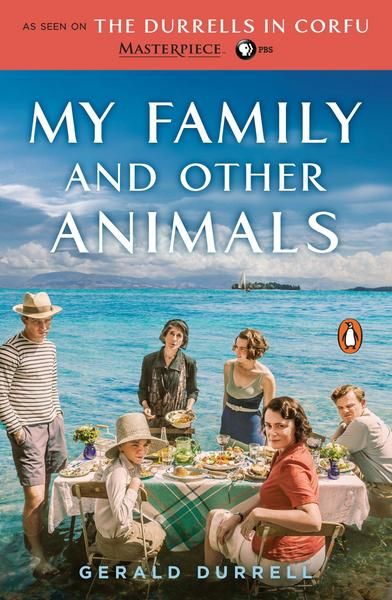 “When the unconventional Durrell family can no longer endure the damp, gray English climate, they do what any sensible family would do: sell their house and relocate to the sunny Greek isle of Corfu. My Family and Other Animals was intended to embrace the natural history of the island but ended up as a delightful account of Durrell’s family’s experiences, from the many eccentric hangers-on to the ceaseless procession of puppies, toads, scorpions, geckoes, ladybugs, glowworms, octopuses, bats, and butterflies into their home.”

Bonus: Don’t miss the other books in the Corfu Trilogy.

2. Stars of Fortune by Nora Roberts 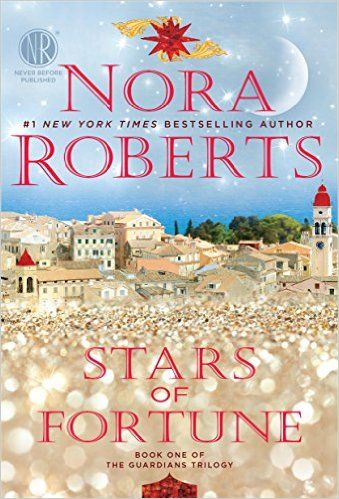 “Sasha Riggs is a reclusive artist, haunted by dreams and nightmares that she turns into extraordinary paintings. Her visions lead her to the Greek island of Corfu, where five others have been lured to seek the legendary fire star, part of an ancient prophecy.

“Sasha recognizes them, because she has drawn them: a magician, an archaeologist, a wanderer, a fighter, a loner. All on a quest. All with secrets. Sasha is the one who holds them together—the seer. And in the magician, Bran Killian, she sees a man of immense power and compassion. As Sasha struggles with her rare ability, Bran is there to support her, challenge her, and believe in her.

“When a dark threat looms, the six must use their combined powers—including trust, unity, and love—to find the fire star and keep the world on course.” 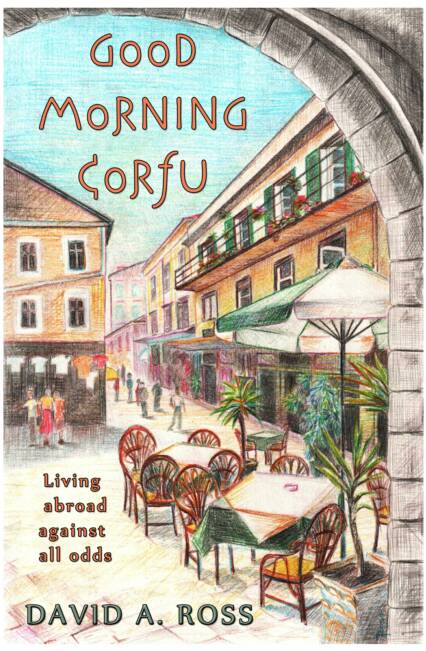 “Good Morning Corfu: Living Abroad Against All Odds chronicles the experiences and observations of an American expatriate living on this Mediterranean outpost of dizzying extremes. Even more than a journal of events and experiences, the essays consider many of life’s more profound issues and concerns with insight, optimism and humor.”

4. This Rough Magic by Mary Stewart 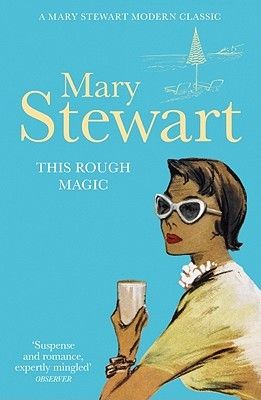 “When Lucy comes to Corfu to visit her sister, she is elated to discover that the castello above their villa is being rented to Sir Julian Gale, one of the brightest lights in England’s theatrical world. As a minor player in the London theatre herself, Lucy naturally wishes to meet him—that is, until her sister indicates, with uncharacteristic vagueness, that all is not well with Sir Julian and that his composer son discourages visitors, particularly strangers. Yet Lucy has already encountered Sir Julian’s son on the morning of her arrival, in a tempestuous run-in that involved the attempted shooting of a friendly dolphin. First published in 1964, this spirited novel will hold Mary Stewart fans breathless as it uncovers a series of mystifying and frightening events, tinging the otherwise sparkling setting of Corfu with dark hues of violence.” “Becky Rowe has just landed her dream job house-sitting at a top-end villa on the island of Corfu. What could be better than six weeks laying by an infinity pool overlooking the gorgeous Ionian waters while mending her broken heart.

“Elias Mardas is travelling back to Corfu on business whilst dealing with his own personal demons. Late arriving in Athens, Becky and Elias have to spend a night in the Greek capital. When they have to emergency land in Kefalonia, Becky’s got to decide whether to suck up the adventure and this gorgeous companion she seems to have been thrown together with or panic about when she’s going to arrive at Corfu…

“Finally reaching the beautiful island, Becky is happy to put Elias behind her and get on with her adventure. Until he turns up at the villa…”

6. A House in Corfu by Emma Tennant 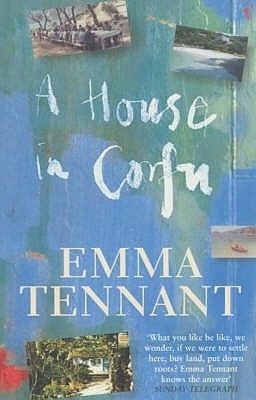 “A House in Corfu is the story of one of the most beautiful places on earth, still astonishingly unspoilt, on the west coast of Corfu. In the early 1960s, Emma Tennant’s parents, on a cruise, spotted a magical bay and decided to build a house there. This book is the story of that house, Rovinia, set in 42 hectares of land above the bay where legend has it Ulysses was shipwrecked and found by Nausicaa, daughter of King Alcinous. It is also the story of the people who have been at Rovinia since the feast in the grove at the time of putting on the roof – Maria, a miraculous cook and the presiding spirit of the house, and her husband Thodoros – and of the inhabitants of the local village, high on the hill above the bay. Full of colour and contrast, A House in Corfu shows the huge changes in island life since the time of the building of the house, and celebrates, equally, the joy of belonging to a timeless world; the world of vine, olive and sea.” 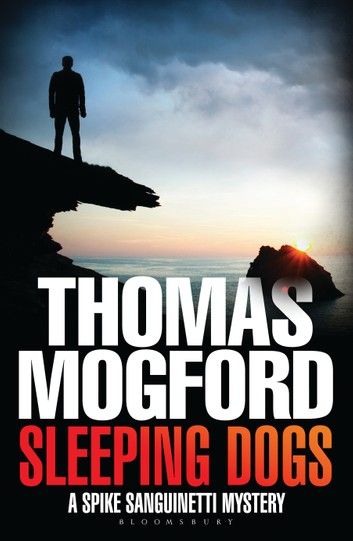 “An old friend persuades Gibraltarian lawyer Spike Sanguinetti to take a well-earned rest on Corfu’s beautiful north-east coast. But when the bloodied body of a young Albanian is found and a local man accused of his murder, Spike reluctantly agrees to take the case. Beneath the island’s veneer of wealth and privilege Spike uncovers truths so damaging that those involved will go to any lengths to protect them. And when a vulnerable young woman disappears, Spike knows that there are some sleeping dogs he cannot let lie…”

8. The Venetian House by Mary Nickson 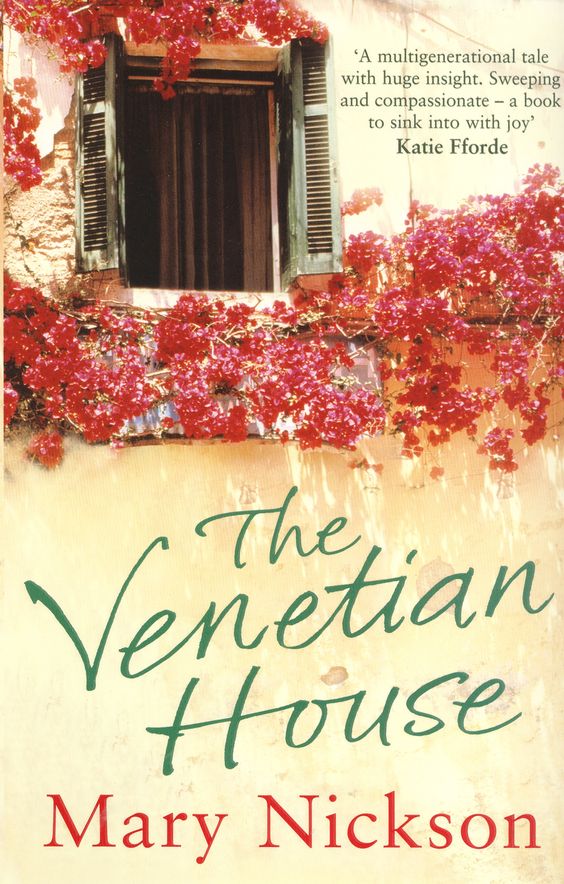 “As a child, her grandmother’s home on the island of Corfu always meant safety. Widowed now, Victoria returns there with her son, Jake, feeling that only in these beloved surroundings can she face her demons. Then Patrick Hammond arrives, bringing with him his own troubles.”

9. A Kitchen in Corfu by James Chatto 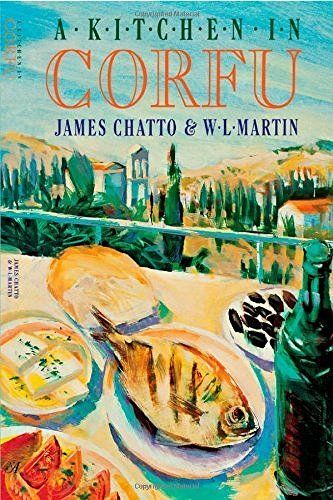 “For many years James Chatto and his wife, Wendy Martin, made their home in the remote village of Loutses, an olive-farming community in the north-east of Corfu. During their first winter, when the tourists had left and the shops and restaurants of the coastal resorts closed, they learned that there was more to Corfiot cooking than they ever imagined. The Lousiotes take a keen interest in food and were willing teachers. Cooking from memory, measuring the ingredients by eye and correcting the seasoning by frequent tasting, they have preserved their recipes without ever writing them down. A sociable people, the Corfiots love to enjoy food and wine in good company―at home or at the taverna. In this delightful book James Chatto and W.L. Martin set down the recipes they have collected, describe the growing, gathering and preparation of food, record the daily round of their friends and neighbors and enjoy the life of a rural village in Corfu.”

10. Corfu: A Novel by Robert Dessaix 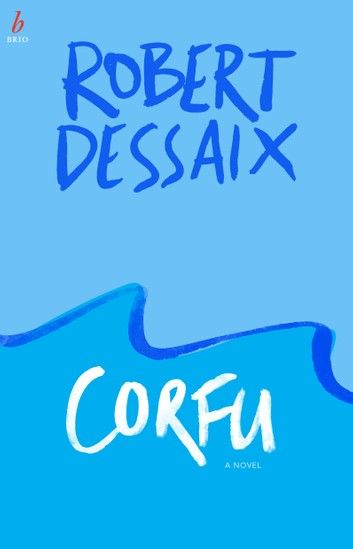 “In a village on the island of Corfu, alone in the cottage of a man he’s never met, a young Australian actor pieces together the strange life story of the Australian writer whose house he’s living in. As he explores his surroundings and makes new friends, his own life begins to appear to him like an illuminating shadowplay of his absent host’s.

“Set in the physical landscapes of the Greek islands, Adelaide and the suburbs of London, Robert Dessaix’s second novel is about the nature of friendship, love, the ordinary and extraordinary. At its core is a perfectly placed meditation on literary landscapes – Homer, Sappho, Cavafy and Chekhov – and the part art can play in making our lives beautiful.”