Review: The Irrationalist Dishes Out Detailed Murder Investigation Of Descartes 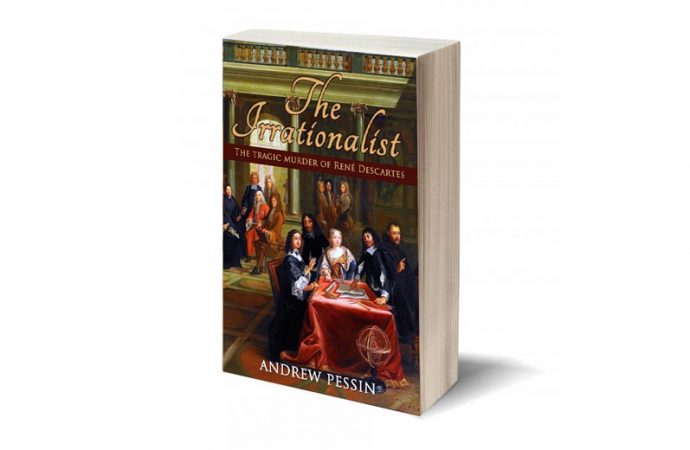 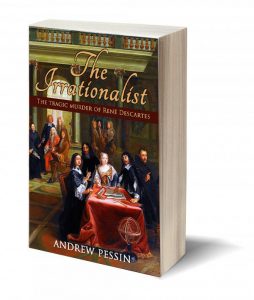 Who would want to murder the world’s most famous philosopher?

Turns out: nearly everyone.

In 1649, Descartes was invited by the Queen of Sweden to become her Court Philosopher. Though he was the world’s leading philosopher, his life had by this point fallen apart. He was 53, penniless, living in exile in Amsterdam, alone. With much trepidation but not much choice, he arrived in Stockholm in mid-October.

Shortly thereafter he was dead.

Pneumonia, they said. But who could believe that? There were just too many persons of interest who wanted to see Descartes dead, and for too many reasons. That so many of these persons were in Stockholm—thanks to the Gala the Queen was throwing to celebrate the end of the terrible Thirty Years’ War—made the official story all the less plausible. Death by poisoning was the unofficial word on the cobblestone.

Enter Adrien Baillet. A likeable misfit with a mysterious backstory, he arrives just as the French Ambassador desperately needs an impartial Frenchman to prove that Descartes died of natural causes—lest the “murder” in Lutheran Sweden of France’s great Catholic philosopher trigger colicky French boy-King Louis XIV to reignite that awful War. Baillet hesitatingly agrees to investigate Descartes’s death, knowing that if—or when—he screws up, he could be personally responsible for the War’s Thirty-First Year.

But solving the mystery of Descartes’s death (Baillet soon learns) requires first solving the mystery of Descartes’s life, with all its dangerous secrets … None of it is easy, as nearly everyone is a suspect and no one can be trusted. Nor does it help that he must do it all under the menacing gaze of Carolus Zolindius, the terrifying Swedish Chancellor with the strangely intimidating limp.

But Baillet somehow perseveres, surprising everyone as he figures it all out—all the way to the explosive end.

The Irrationalist is perfect for fans of historical fiction, particularly if you like the dish detailed and with a side of pretty gruesome violence.

Adrien Baillet, an impartial Frenchman, investigates the death of Rene Descartes on the orders of Zolindus, second in command to the Queen of Sweden. So long as his findings report death by natural causes, he will be spared a prickly fate himself. With nowhere to turn, he begins his investigation… but the evidence points to anything but a natural demise. With nearly everyone a suspect, Baillet can trust no one. Piece by piece, he unravels the mystery.

I feel sorry for Adrien Baillet. Finding himself stuck between a rock and a hard place, he has to “investigate” Descartes death. He cannot afford to refuse if he wants to keep his head, but without the funds to return home, he can’t escape Sweden either. Young and lacking experience in the ways of court, he is the perfect puppet for Zolindus to manipulate.

I like how flawed Baillet is as a character. Despite having noble intentions, he is weak – cowardly even. What he lacks in strength he makes up for in intelligence. In that, Zolindus underestimates him. A lot of books paint protagonists to be the best of the best, but this is unrealistic. These characters are human and by nature, are not perfect. Baillet’s fear and inability to stand up for himself helps raise the tension of the narrative. With murder and subterfuge lurking around every corner, it is easy to understand his paranoia.

The plot is well developed, which is necessary given the complexity of the murder investigation. Baillet considers the potential motive of every character, but the conclusions drawn aren’t forced in order to make everyone a suspect. Every motive is well explained and backed-up, which I imagine is a very difficult thing to achieve. It would take a lot of knowledge and research to make this novel work so well, which Andrew Pessin has accomplished effortlessly.

Within the narrative of the investigation are chapters that look back into the past life of Rene Descartes, before he makes it to Sweden. Not only do these provide a lot of insight into his relations with other characters, (usually outlining why there was bad blood), but they change the pace of the book to make a refreshing break from the heat of the moment in Sweden.

Honestly, I didn’t anticipate the ending at all – which is a measure of a good mystery to my mind. We come to our own conclusions about the murder; but there is nothing like a good 11th-hour plot twist to keep us on our toes. 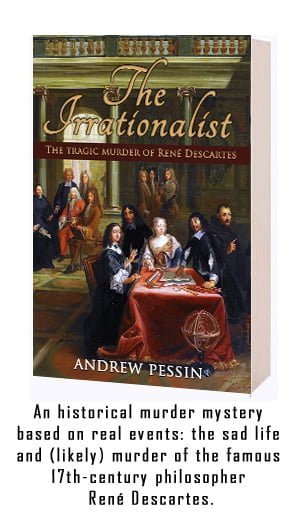