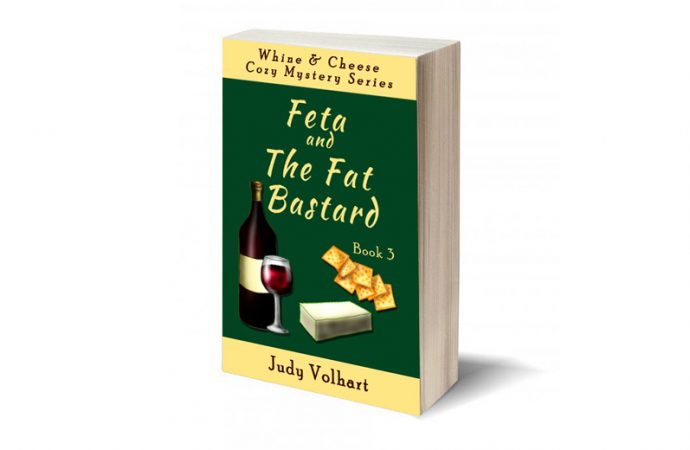 Judy Volhart gives the reader a light, enjoyable cozy mystery in Feta and the Fat Bastard, book three in the Whine and Cheese series. In this installment, we find Amalia Kis fresh off two previous murder cases she helped solve when out of the blue, a woman drops dead in the parking lot of her bistro. It soon gets out that Blanch, the young ex-escort wife of the Jabba the Hut-like Milton was poisoned. It doesn’t take long for rumors to swirl around Amalia’s bistro and whether it’s safe to dine there. Mr. Leonardo, the owner of the local pizza joint, sees his opportunity to remove Amalia and her bistro as competition and helps to spread the unsavory news. Desperate to clear her name and restore her thriving business, Amalia sets out to find the real murderer before her business fails. 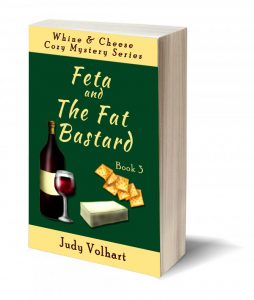 Feta and the Fat Bastard by Judy Volhart

There were a couple times during my read of Feta and the Fat Bastard I burst out laughing. My favorite bit of side story and comic relief was when Amalia needed to whip something up for the bistro but had failed to make it to the market. In a quick turn of ingenuity, she heads over to Mr. Leonardo’s pizzeria and taunts him. Knowing Mr. Leonardo has a penchant for hurtling food her way, Amalia easily catches a full baton of pepperoni followed by some salami for good measure. Amalia heads back to the bistro and whips up some devious pepperoni chips for her customers.

Speaking of food, don’t read this book while hungry, and stay far away if you’re dieting unless you like torture. I tend to read before bed, and there were a few occasions where I was compelled to forage for snacks. Almost every page of Feta and the Fat Bastard is teaming with mouth-watering delights. And in case you wanted to try your hand at creating some of the amazing dishes mentioned, fear not, peppered between chapters are recipes. Usually, I hate recipes in books, but I tried a couple and I was not disappointed.

As with most contemporary cozy mysteries, there is a bit of romance, but it flows well with the narrative and adds to the complexity of the characters, something that can be lacking in the genre. I enjoyed the character development of Amalia and her real-world struggles of balancing life, romance, business, and solving murders. I could relate to most of what she faced, save for the murder bit, thankfully. Most of the secondary characters are well developed for a shorter novel. I imagine that a few of them had more page time in past books. Even Hummer, Amalia’s cat, is well written. I could picture his heavy-lidded judgmental gaze as he lazed on the counter waiting for his “smelly wet food.” Anyone who’s owns a cat knows that look.

My favorite part of the way Volhart developed her characters was through indirect examination. Take Matt for instance. Matt doesn’t get a lot of page time, but through comparisons made between him and Nathan, the reader gets a broader picture of what Matt is like.

The few issues I did have revolved around clunky, unrealistic dialogue, (“My lips ache for yours when we’re apart. I don’t even try to understand it, after such a short time knowing you.” Who talks like this?) detectiving that was way too easy (it should be way harder to find people’s home addressed on the internet), and some overused phrasing. There was a lot of lip smacking and loin twitching going on. Yet for the casual reader, these nitpicks will fly below the radar. Even for my hyper-critical eye, they didn’t take away from the book’s enjoyment level.

Would I read another book in the Whine and Cheese murder series? Absolutely, but next time I’ll make sure to have some high-end snacks on hand and a large glass of wine to go with it, preferably one with a snarky name.

FETA AND THE FAT BASTARD by Judy Volhart 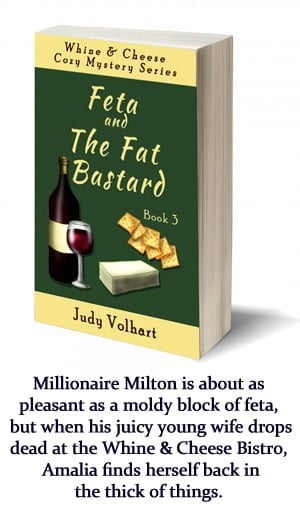