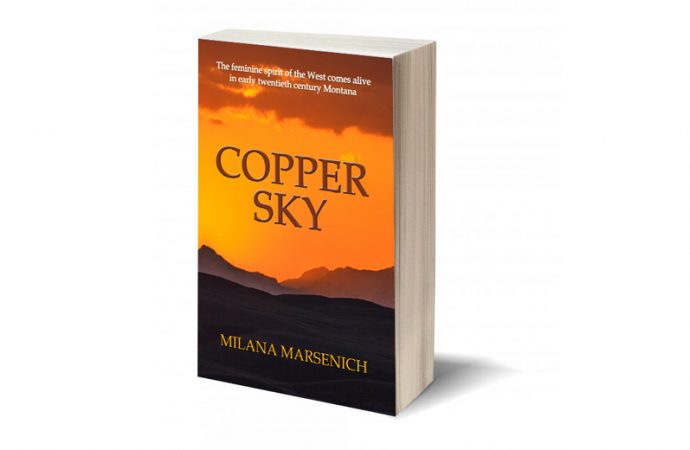 Most of our stories and images of mining towns are about men, so I was intrigued by this novel about women in Butte, Montana. Copper Sky, by Milana Marsenich, tells the connected stories of two very different women in this town. 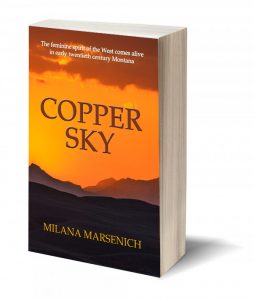 The novel starts off slowly, with a lot of repetition of the key facts. We also see our main characters considering their lives… Their choices are hard, but someone walking around town dithering isn’t a page-turner. Stay with the slow scenes and lack of character agency, though, for a worthwhile payoff in the compelling second half of the novel. Those slow-moving scenes helped develop these two women into vivid characters. Readers will care for these two so much by the time their secrets are revealed, and this mining town holds loads of secrets.

After growing up in town’s orphan home and tragically losing her sister, Kaly Shane is a sex worker. There are a lot of working girls in town, serving the miners who don’t have wives or who haven’t brought their families out west. Kaly’s newly pregnant, and basically everyone in town knows, except the baby’s father. I was intrigued by the drama, but also wanted to see where this was going.

At the same time, Marika is dealing with an arranged marriage by not dealing with it. She doesn’t refuse and she doesn’t accept and try to make the best of it, she just kind of drags her feet. Again, I was intrigued, but wanted some action. Marika wants to be a doctor, blending the herbal concoctions and folk remedies from her grandmother with modern medicine, but of course this isn’t an easy option for a young woman.

What seemed like a slow beginning and lack of character agency actually highlights the powerlessness of women in this city. The men are engaged in dangerous, grueling, and occasionally very profitable work, while the women try to cope as their husbands, fathers, fiances and friends risk going to work one day and never coming back. Every woman’s life has been touched by tragedy in the mines. They’re only reacting, not controlling these events.

In addition to Kaly and Marika, we also meet Bethie, another prostitute with an opium habit. Like Kaly, she turned to sex work as the only way to support herself, and she relies on her friendship with Kaly, opium, and an unsuitable “romance” to keep herself happy. Her madam is blunt about hiring only the youngest, prettiest girls,and blunt about the work they do. While she’s meant to be unsympathetic, I couldn’t help seeing the hard realities of mining town life in her practical money-making. Even the harsh orphanage matron reveals her reasons for what she’s done, and they’re a result of her own tragedies in life.

I enjoyed the scenes of daily life in Butte so much. This novel showed so many new aspects of life in a mining town. I also found the novel’s ending satisfying and believable, without being overwhelmingly positive, since that wouldn’t have been sense for this setting. At the end of the book, our heroines are on realistic but uplifting paths. 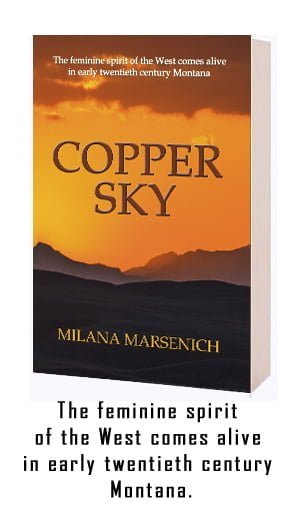