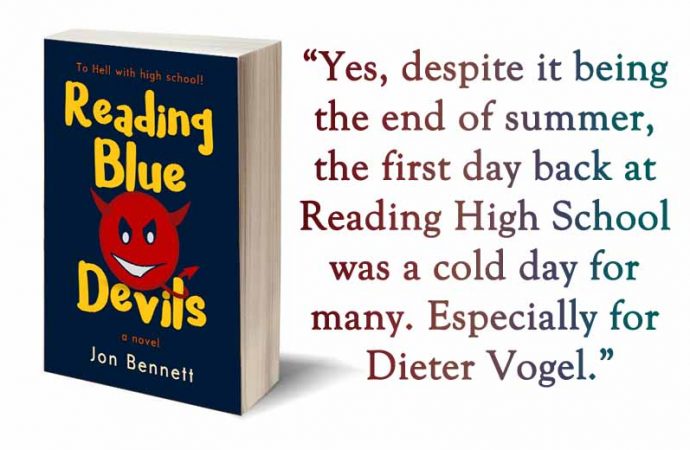 To Hell with high school! In Reading Blue Devils: A Novel by Jon Bennett, the American education system is turned inside out when a frustrated teacher incites his students to stage an uprising. Here is an exclusive excerpt from the novel:

The first day back from summer break was the day Dieter Vogel’s shits returned―the ones that tied his stomach in knots and kept him up at night; the ones that played loud rap music and obsessed about sex; the ones that refused to read or write and disregarded any direction that Dieter gave in class; the ones that were putting his career in the toilet through their misbehavior and poor performance. 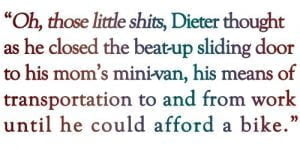 Oh, those little shits, Dieter thought as he closed the beat-up sliding door to his mom’s mini-van, his means of transportation to and from work until he could afford a bike.

Of course, nobody really wanted to be at school: the drudgery of sunny days left unfulfilled saddled the students and staff alike as they arrived on those warm August mornings. There were, of course, the exceptions. The previous year’s student body president, Maria Lopez, came poised for another year of building her college resume. She showed up at school thirty minutes before the first wave of school buses, campaign button clipped neatly onto her school-appropriate blouse. The sophomore biology teacher, Mrs. Stewart, who vomited sunshine and excreted rainbows, was merrily adjusting colorful posters that flaunted motivational clichés, the scientific method, and pictures of famous scientists. Even the school secretary was undertaking joyful last-minute preparations, removing her candy jar from her desk and replacing it with a stack of tardy slips—the sweet building blocks of detentions and suspensions.

For the students, rigid routines, early mornings, and a prolonged focus on something other than video games would burden them for ten months. On top of that, their teachers, who had little understanding of their students’ life circumstances, would lecture them on the importance of abstract concepts that would not put food on their families’ plates for years to come, if algebraic functions could ever do that. 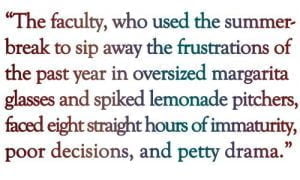 The faculty, who used the summer-break to sip away the frustrations of the past year in oversized margarita glasses and spiked lemonade pitchers, faced eight straight hours of immaturity, poor decisions, and petty drama. For one hundred eighty days, they had to somehow seem more interesting than the students’ phones and gossip. They had to teach nuanced reasoning and critical thinking. They had to offset years of bad habits and poor education. And they had to stake their educational worth on a pre-made curriculum and the bubbles of a scantron.

High stakes testing, an already disheartening facet of the American educational system, would be especially ponderous this year. It would decide the school’s fate and, by default, the teachers’ jobs. On top of that, Principal Walter Sanders was pushing an extra initiative to build up the staff’s educational efficiency. While many teachers accepted the motion, they soon discovered that it meant additional time, energy and focus, three things already in short supply.

And then they had to confront the school’s physical structure.

Inside the building, brown-tinged windows filtered nature’s brilliant luminosity, blending it with glaring florescent light. Every inch of floor was perpetually dusty. And the colors of the walls alternated from dirty pastel green to putrid yellow.

Outside, dreary concrete walls, plain and prison-like, did almost nothing to insulate the classrooms from weather extremes. In those final days of summer, the building sweltered under the hot sun, unaided by faltering air-conditioning units and windows that only opened six inches. The rooms were saunas saturated with the sweaty stink of adolescence. During winter, the bitter cold enclosed certain classrooms in its frigid embrace. In classrooms with heaters, the same sweltering humidity from summer returned since the radiators did not turn off for hours at a time.

Beyond maintaining a reasonable temperature, the building required minor fixes as well as major projects. As a failing public school with a dying tax-base, repairs and improvements were always wanting. One glaring project was the flat, tar-and-gravel roof, which was especially problematic even after minimal precipitation.

The teachers, all veterans of three years or more, knew they would face complaints by the students that they could not fix. They knew that the hot air would cause drowsiness. They knew that their curriculum would be dissected based on standards constructed by politicians with few, if any, years inside a classroom. They knew that it would take nothing short of a miracle to turn the school around. 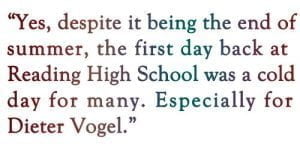 Yes, despite it being the end of summer, the first day back at Reading High School was a cold day for many.

He was not teaching the students in accordance to government testing standards, and he wasn’t enhancing himself as a professional. In truth, he was not cut out for teaching at-risk, minority youth. They needed warmth, strength and innovation from their teachers; all they got from Dieter was a smug-wet blanket.

Returning to high school pushed Dieter in front of the mirror in which his many flaws and insecurities would be reflected daily. High school, Dieter found, was not just a turbulent place for high-hormoned adolescents, but for under-achieving adults as well.

Though a teacher, Dieter faced the same trials of many teens. He struggled with a negative body image, mostly because of his excessive junk-food binges. He had an infatuation for a woman who barely acknowledged him. He depended on his mom for transportation since he couldn’t afford a car. He had a propensity for fast food over home-cooked meals. He couldn’t keep meaningful social connections with people his age. He wasn’t to be trusted to keep a pet alive for more than a week. And there was even a bully on staff that tormented him. At least he had lost his braces.

Dieter stumbled over the second of two concrete steps that led from the drop-off driveway to the extended sidewalk that led to the entrance. A “Welcome Back” banner, which was unfurled after summer, winter, and spring breaks, hung on the wall above the school’s four double-doors. Even in the overcast light of morning, Dieter saw the banner as an artificial beam of cheerfulness that did little to alleviate the bitter fog that followed him.

His eyes drifted up to the banner as he reached the doors. The sign, upon closer examination, had been vandalized with a large black permanent marker.

“I hate adolescents,” Dieter muttered to his shadow.

With a lowered shoulder, he pushed into the wooden doors, flopping into the maroon-carpeted main entrance, which smelled of a vacuum’s burnt motor mixed with a cocktail of chemicals. Where the circle of classes began, freshly waxed linoleum tiles shimmered and stank of a stale coating wax. A congregation of students lifted dreary eyes in acknowledgement of an adult in their presence before they resumed grunting their frustrations to the other teens around them. 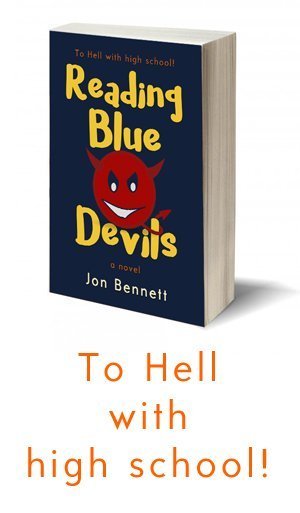