Read An Excerpt From Postcards From The Borderlands By David H. Mould 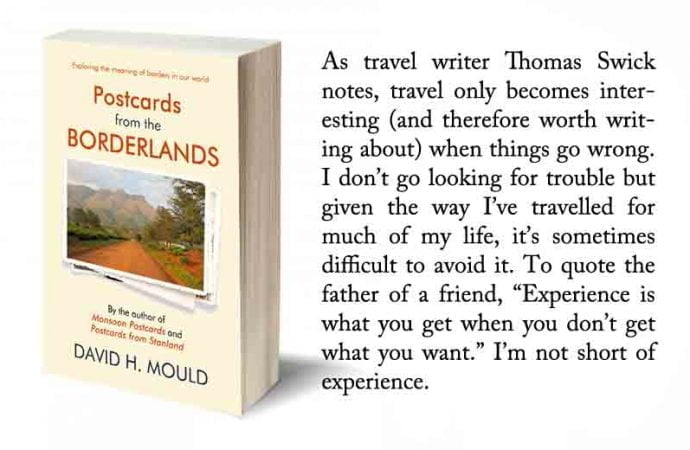 What are borders? Are they simply political and geographical, marked by posts, walls and fences, or should we think of them more broadly? Consider the borders within countries, determined by race, ethnicity, or caste. Borders may be physical and economic, and even perceptual—the borders of our minds. In Postcards from the Borderlands, historian and journalist David Mould rambles through a dozen countries in Asia, Southern Africa and Eastern Europe by car, bus, train, shared taxi and ferry, exploring what borders mean to their peoples. Below is an exclusive excerpt from the book.

The two cops were loitering with intent when I arrived at Almaty airport in southern Kazakhstan. I was doing my best to merge with the crowd. I was dressed in jeans, a faded T-shirt and sneakers; my chin sported several days of stubble. My dented suitcase looked as if it had been tossed around too many times on the tarmac and chewed up on baggage carousels. I had arrived, not in a taxi or hotel car, but in one of the city’s beat-up marshrutkas (shared taxis), the crowded minibuses that ply short-haul routes in Central Asia. If I didn’t open my mouth and mangle Russian syntax, I hoped I could pass for one of the ethnic Russians, Ukrainians or Germans who made up a sizeable minority of Kazakhstan’s population.

The cops were experienced in the art of foreigner spotting. Something about me—perhaps my body language or the purposeful way in which I walked—told them they had a customer.

“Vash passport, pozhousta [Your passport, please],” one asked, as his partner shifted his frame to block the sidewalk in front of me.

After the collapse of the Soviet Union in 1991, customs and border officials in the five Central Asian republics—Kazakhstan, Kyrgyzstan, Tajikistan, Turkmenistan, and Uzbekistan—earned a reputation for trying to shake down weary travelers by inventing entry taxes and selling transit visas you didn’t need. Other scams involved currency controls. Because of capital flight, these countries imposed limits on the export of currency. However, the official inquiry, “How much money are you carrying?” was often the prelude to a search and an on-the-spot, undocumented fine.

Most attempted shakedowns were minor, and often played like a game. The cop who scanned my passport noticed that my local registration stamp had expired two days earlier. “That’s a $100 fine,” he declared triumphantly, as if he had just solved a major white-collar crime.

I was not convinced. Perhaps I had violated a minor provision in the Kazakhstan Civil Code, but I figured that the fine, if there was one, would be denominated in Kazakhstan tenge, not dollars. “Show me the regulation,” I asked. We entered a small office inside the terminal. There was no sign on the door, so I wasn’t even sure it was the police office. As the cops skimmed through papers on the desk, failing to find the one that described my offense, I became impatient.

“Even if you’re right, I don’t have $100,” I said, not entirely truthfully. My inquisitors looked crestfallen. “How much money do you have?” one asked. “One thousand tenge [at that time, about US $12],” I replied. “That will do,” the first cop said. “Have a nice flight, and if anyone else in the airport asks, please don’t mention this happened.”

I handed over the money, shook hands, accepted a shot of vodka, and went on my way. In a country where police do not earn a living wage and routinely stop drivers to extract small fines, it was an additional, and not unexpected, travel expense.

As a traveler who writes about his experiences, I may have come out ahead on the deal. The cops got enough to buy two more bottles of vodka. I got an anecdote about petty corruption that provided a glimpse of life in a post-Soviet society that was undergoing wrenching social and economic transition. As travel writer Thomas Swick notes, travel only becomes interesting (and therefore worth writing about) when things go wrong. I don’t go looking for trouble but given the way I’ve travelled for much of my life, it’s sometimes difficult to avoid it. To quote the father of a friend, “Experience is what you get when you don’t get what you want.” I’m not short of experience.

In retrospect, the shakedown at Almaty airport makes a good traveler’s tale. At the time, I had no idea what might happen to me in a country that routinely arrests and imprisons activists, journalists and, occasionally, foreigners working for international and non-governmental organizations. I was in the latter category; I had spent the last two weeks in Almaty conducting a workshop for journalists sponsored by UNESCO. That’s perhaps why my heart always races a little when I approach or cross a border. Will my passport and visa be in order? Will one of my entry stamps raise an eyebrow, a question about what I was doing in that country? At the airport, will the immigration officers be suspicious if I switch to a line that is moving faster? Is it worth slipping a small bill into my passport for expedited service? That depends. In some countries, you’ll be whisked through with a nod and a wink; in others, you may be arrested.

Then there’s the issue of how much to say about what I’ll be doing in the country I’m about to enter. I’ve learned not to volunteer too much information, because it may appear I’m hiding something. Most of the time I’m unnaturally reticent. “Purpose of visit?” “Business.” “How many days?” “Ten.” If I can get through with a few words, that’s fine.

Related: Read an interview with David H. Mould, author of Postcards from the Borderlands 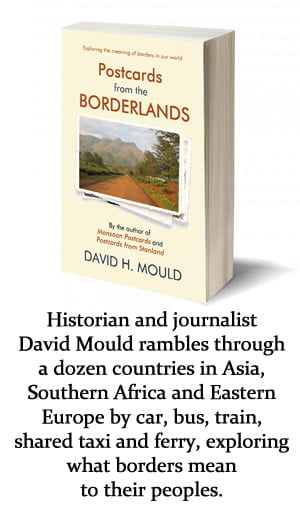