Read An Excerpt From Only Billionaires Can Play By Fred Leavitt 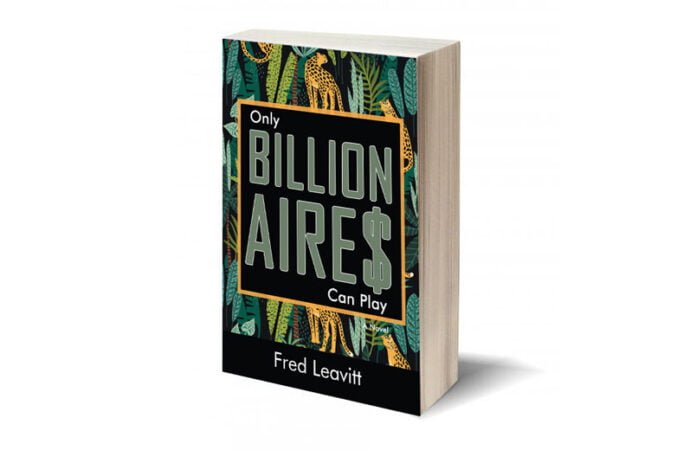 What happens when a group of extremely wealthy and very bored individuals develop a game in which they compete to secretly manipulate selected real life targets to perform crazy and demeaning behaviors? Only Billionaires Can Play by Fred Leavitt is frighteningly plausible, and readers will find both its premise and its conclusion highly unsettling as they come to realize that they can never again be certain of anything. Below is an exclusive excerpt from the novel.

Paul Combes:
Life Was Simple Then 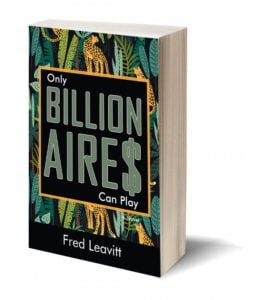 Paul Combes ripped April, 1994 from the calendar and fixed a cold gaze on May. The cartoon pig-man with vaguely Paulish features stared back through heavily lidded eyes. Splayed in belly-down position, baseball in mouth and catcher’s mitt on left paw, pig-man watched dejectedly as opposing runners sped around the basepaths. Months earlier, Paul had paid his friend in the art department to draw the caricature. Wasted money. He needed no added incentive to shape up for the July softball game pitting his radio station KDJM against KSMO. Losers treated winners to dinner, and KDJM had footed the bill for seven years straight.

Paul dropped for fifty pushups, swallowed creatine stirred in water, waited ten minutes, tried for fifty more. Bad left shoulder searing with pain, he managed forty-two before collapsing on the exercise mat. He rolled onto his back and stared at the 3 x 5 index card tacked to the wall next to pig-man. The taunting message bore his scrawl: “Too low they build who build beneath the stars.” Edward Young

Still on his back, he did fifty sit-ups and a round of stretching, then rolled over again for another dozen pushups. Breathing hard, he addressed pig-man. “I’ll do two sets of fifty tomorrow, two seventy-fives the next day, three sets within two weeks.” He intended to be in peak condition by July 4.

Station manager Arlene Conant joined Paul in the cafeteria line. She’d been on a week’s vacation, and something seemed subtly different. Hair? Clothing? Weight? He said, “That’s a pretty blouse.” Arlene nodded and took a tuna salad for her tray, her tepid response making clear that he’d paid the wrong compliment. Paul built a giant pyramid of food and inched it along the checkout counter, careful not to tumble mashed potatoes into sole fillets or fruit salad. The homeless man outside rejected obvious leftovers. He tried estimating the volume of the food pile but couldn’t recall the formula for volume of a pyramid. Anyway, more than he could eat at one sitting. Arlene muttered, “Where do you put it all? That’s enough to feed a football team.”

Leaning toward the recently hired cashier, Paul nodded to indicate a significantly overweight man further down the line. He whispered, “You probably recognize Gordy Jackson. Best DJ in the country, but touchy about his girth. Gordy hates for people to see how much he eats, so he puts just a little on his tray and I pick up the rest. He’ll pay for this.” Arlene chuckled and the cashier joined in, willing co-conspirator. The two patrons sat near the cash register and a few seconds later were rewarded with the laugh famous throughout the Bay Area. A magisterial boom that demanded notice, halted conversations, encouraged participation. Seeing Paul’s tray, Gordy boomed again, then solemnly intoned, “Your humor hasn’t evolved beyond Neanderthal, you mesomorphic gnome.” He eased into the standard-sized cafeteria chair, blubbery backside more overhanging than on. Turning to Arlene, “You look magnificent, my dear. You should have gone blonde years ago.” Arlene beamed. Paul said, “You do look great.” He felt like an idiot.

Gordy asked, “Are you both free tonight?”

“Arlene, we’ll go next week. Paul, cancel quiet.” He snatched Paul’s cell phone and dialed by heart. “Hello, reservations for two please. 6:30. C-O-M-B-E-S.” Turning to Paul, “Pick me up at 6:00 and I’ll tell you where. Your treat, as payment for the pain and suffering you just inflicted.” Looking disdainfully at the bulging tray, “I guarantee you, my appetite won’t be so skimpy.”

Now anticipating a gourmet dinner, Paul skimped on lunch. Paul packed the barely shorn pyramid into a take-out box and carried it outside.

Gordy wriggled out of the front seat of Paul’s ’18 Prius and smoothed his jacket lapels. Extracting a dark blue tie from a pocket, he said, “Help me knot this. I never do it right.” Paul said, “Uh oh, I didn’t bring a tie.”

“My fault, I forgot to tell you that ties are mandatory.” Gordy’s shoulders slumped. “I’ll tell the hostess we have to cancel. What a shame, the food here is superb.”

Paul ran his fingers through his dark black hair. “Gordy, I feel terrible. I should have checked. If you want to pick another restaurant for tonight, we can come back here next week.”

He unlocked the passenger door. Gordy made no move to get in, suddenly snapped his fingers as a mischievous grin spread across his face. “We’re in luck, I just remembered that I have an extra.” He let Paul watch transfixed as slowly, gleefully, mimicking a stage magician, he pulled the tie through his fingers. It was a monstrosity. Glowing bright red with pictures of naked women cavorting on a beach, the tie had required a three-store search that afternoon. Paul held it at arm’s length as if he’d been handed a dead skunk. Gordy took two steps back and nodded with vigorous admiration. “Magnificent! That tie epitomizes you.” He grabbed Paul’s elbow and dragged him into the lobby. To Paul’s great relief, the maître d’ intercepted them and suggested that he might feel more at ease with one of the ties kept handy for such emergencies.

Paintings by local artists hung from every wall of the newly refurbished Fourth Street restaurant. Pointing to a street scene of downtown Oakland, Gordy said, “I’m sure you didn’t notice, but there’s a similar one by the same artist hanging over my fireplace.” He eased himself into the oversized chair, which accommodated him comfortably. “Tonight I elevate your taste to something more sophisticated than hotdogs and beans over a campfire.”

A cup of leek soup was listed at ten dollars, most of the entrees in the mid-thirties. Gordy said, “Think I’ll start with the chowder, then a Caesar salad. Their lobster is fantastic—flown in daily from Newfoundland.” He beckoned to a hovering waiter. “Let’s have a bottle of your best chardonnay.” Paul, two weeks away from payday, wondered if he could get away with ordering a small salad (eight dollars and fifty cents).

“You’re really expecting to pick up the bill, aren’t you?”

“I’m willing to sacrifice a month’s pay so my undernourished buddy doesn’t starve to death. Besides, I need this time to change your mind about the ballgame.”

Gordy shook his enormous head. “Forget it. The good news is that dinner’s on me. I convinced Arlene to let me do a weekly restaurant review, so the station picks up the tab for GJ and guest. Naturally, I’ll sample everything you order.”

Paul wiped his brow with relief. “Gordy, you’ve got to play.”

“Look, what do you weigh? One hundred eighty, one hundred eighty-five? Well, maybe you haven’t noticed, but it’s not just in intellect and charm that I have you doubled. Running is painful and embarrassing.”

“Nobody expects you to get five hits. You’re overweight, you smoke, and you eat like a bull elephant, but you’re a hero to most of the Bay Area. Maybe if other fat degenerates saw you, they’d start exercising and getting healthy.”

“You’re such a sweet talker, I’m almost tempted. But KDFA always wins, so they get to donate the proceeds. I won’t help support their Tory values.”

“Losers donate twenty-five percent, and you can pick the charity. With you as an attraction, we’ll get a great turn-out.”

“You ungrateful shit, this is my thanks for giving you the best meal of your boring little life. You think the fans want to see their favorite celebrity die of a heart attack? Alright, alright, but you have to break the news of my fatal coronary to my parents. Also, I’ll give you the names of all my ex-girlfriends; I’ll want a gigantic on-field suttee.”