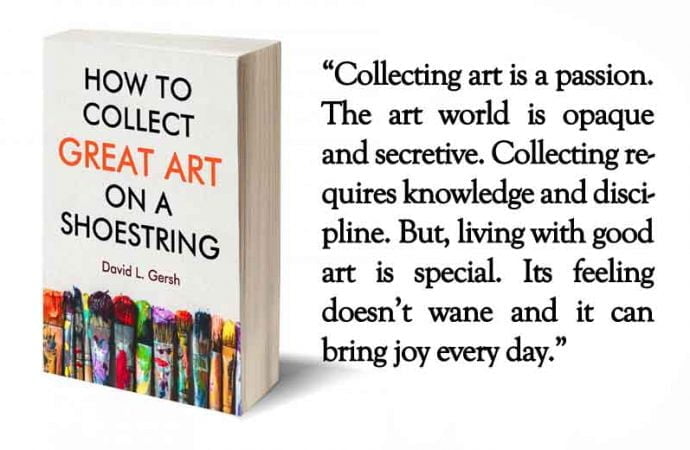 A how-to guide for new and experienced collectors, How to Collect Great Art on a Shoestring by David L. Gersh explores the unique opportunity to acquire one-of-a-kind works for $2000 or $3000 by hundreds of mostly forgotten yet startlingly good artists who are in the permanent collection of MoMA, the Guggenheim, the Whitney, the Met, among many other museums. Here is an exclusive excerpt from the book: 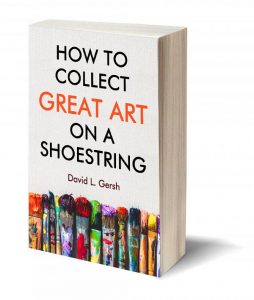 How to Collect Great Art on a Shoestring by David L. Gersh

Collecting art is a passion. The art world is opaque and secretive. Collecting requires knowledge and discipline. But, living with good art is special. Its feeling doesn’t wane and it can bring joy every day.

This book explores a flaw in the art market that provides collectors, who have limited resources, the means to collect one-of-a-kind works by extraordinary artists.

There is always the new, new thing. The hot, young, sleek maverick of the moment who is the toast of the art world.

Tastes change and collectors have short memories. Unless there is a gallery actively pushing an artist’s work, or, even perhaps, a museum retrospective, enumerable artists fall from the lips and minds of collectors and professionals. This is what creates opportunity.

Artists who had critical success, who were talented and devoted, who were handled by world renowned galleries and collected by major museums, have been forgotten. There are hundreds of them. You would not know their names. I certainly didn’t. Even museum professionals who don’t know them are delighted when they see their work.

Just a single example. I had never heard of Carmen Herrera. I had never seen her work. My wife, Anne, and I were in New York in 2017 and happened upon the Whitney retrospective, celebrating Herrera’s 101st birthday. I was simply blown away. It was the first exhibition of her art in New York in over 20 years.

In the 1950s, Herrera developed a distilled geometric style of abstraction and reduced her palette to three colors for each composition. Her work emerged at the same time as that of Ellsworth Kelly, in a case of parallel development. Kelly became famous. Carmen Herrera was forgotten.

Herrera prefigured Minimalism by almost a decade. She didn’t sell her first piece of art until 2004, when she was almost 90 years old. I wish I had bought it. I wish I had discovered her before anyone else. She is what this book is about.

In case you might think this oversight is limited to recent artists, the Frick Collection in New York is installing a major show of the Renaissance painter, Giovanni Battista Moroni, in the first major exhibition of his work in the United States. As The New York Times said, “The history of art is littered with significant painters who never reach the same level of renown as some of their peers. Sometimes omissions are justified by a disparity of skill, but in certain cases bad luck, prejudice or misunderstanding prevented artists from getting recognition.”

After launching a probing assault on my teeth, my dentist decided to upgrade his dingy to a yacht. He left my art budget in a shambles. I had to find a new way to collect. It sent me in a different direction and on to some novel discoveries. Bless his heart.

I collect dead artists. That is bad for the artists, but good for me. Their body of work is set, both in quantity and quality. It allows research and the ability to qualify their art. The methods of doing so are my story. To be able to create a collection of original art of high quality on a limited budget is a grand adventure.

The art world is a jungle. It is largely unregulated. It is full of stunning flora and beautiful creatures. A glistening river of art flows through it. And predators hunt the unwary.

To perhaps peak your curiosity and to lure you into its beauty and shadows, I survey the ways and the scandals that exist within it. But once you enter this jungle, it will never loosen its grip on you.

In some ways, this book is a primer on collecting. There may be background material familiar to the more experienced collector. But it took me years of collecting to learn a lot of these things, so perhaps a review will be helpful.

In certain circles, collectors are seen as rich, privileged and powerful. Most of these, observed Loic Gouzer of Christie’s, don’t actually enjoy discussing art and asking questions. They see a Twombly painting and Gouzer will say, “You should compare it to others in Twombly’s catalogue raisonne’.” And they’ll respond, “I just need to know if it’s an A or an A+ or a B+.”

If you are interested in this book, you are not rich. Only passionate or curious. Collecting is a lifelong journey. Goethe, the poet, wrote that the collector is a happy person. I believe he was right.

For me, writing a book is the crossroads of hubris and humility. Hubris because I think someone will want to read what I have written. Humility because I fear no one will. So, I hope you read on. Or at least that you have already bought this book.

Read an interview with David L. Gersh, author of How to Collect Great Art on a Shoestring

HOW TO COLLECT GREAT ART ON A SHOESTRING by David L. Gersh 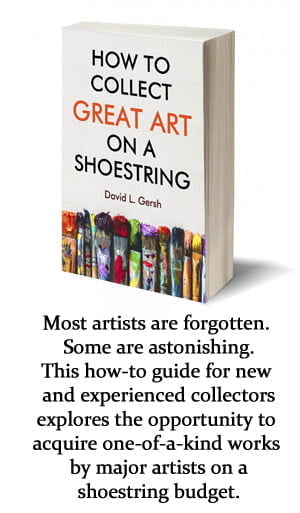