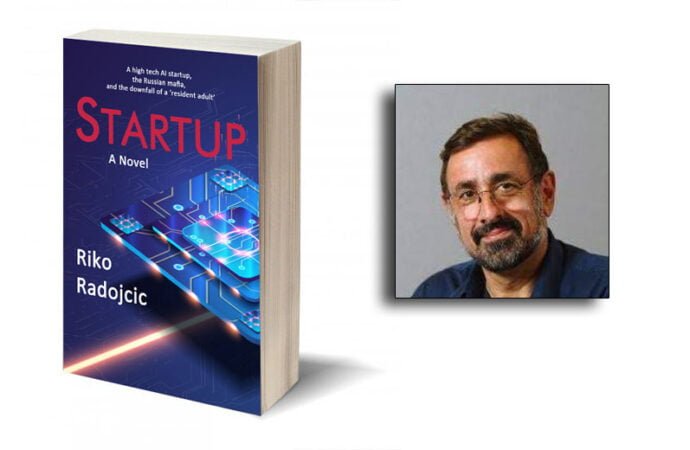 A high tech AI startup, the Russian mafia, and the downfall of a ‘resident adult.’ Riko Radojcic, the author of Startup, talks to Book Glow about his new novel. 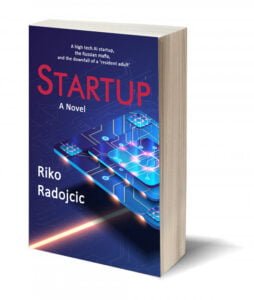 A story of a professor who takes seed money from a shady oligarch to start-up a high-tech company, and who then has to figure out a way of resisting pressure to use illegal and unethical means to maximize the value of the venture.

I write alternate-reality/techno-drama stories that are set in high tech industry. Since startups have always been a big part of the high tech industry lore, I thought that a story that describes what is typically involved in a startup would be a good topic in general—but too dry for fiction and too boring for a generic reader. Then, when COVID pandemic came, I thought that the impact of the lockdowns on the high-tech industry vs the industries that involve a lot of human contact could be a source of interesting contrasts. So I thought that spicing up a story of a startup with a situation where multiple contrasting worlds interact might make for some good drama.  High tech  vs. the oldest profession. An academic vs an oligarch. American ethic vs an Armenian connected to the Russian mafia…

About 9 months. A bit less due to the pandemic.

I am a relative novice and am tinkering with different genres and styles. I definitely prefer the freedom of fiction over the rigor of scientific and technical writing. But, per the adage to write about things you know about, I thought that writing fiction that is set in the world of high tech would be appropriate for me. I am still very fascinated by the semiconductor technology and like the idea of sharing that awe by weaving in interesting technology facts into my stories. Like Grisham does with law. So, techno-drama or alternate reality seems like a good fit for me. So far…

I am a novice writer. My learning: just do it!

The next project is about the post-globalization rivalry where everyone (US, EU, China…) is striving to build  those $20B factories for manufacturing semiconductor chips on shore, which is the factual part, and the games that they may play to sabotage each other’s efforts, which would be the fictional part…  Target publication date with Open Books sometime in September/October time frame.

A little bit about yourself and what made you write?

I was an electronic engineer with a 35-year career in the semiconductor industry. It was a fantastic ride and I had opportunities not only to get involved with different aspects of technology but also to do management, marketing and business development on top of the pure technical stuff, and to work with amazing talented people from all over the planet. So, like an old soldier who tells war stories, I write fiction to tell stories about that mind boggling world…