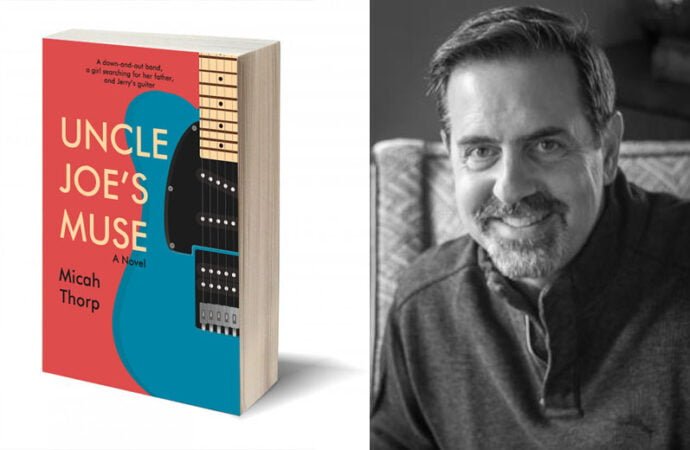 A down-and-out band, a girl searching for her father, and Jerry’s guitar. Author Micah Thorp talks to Book Glow about his debut novel, Uncle Joe’s Muse. 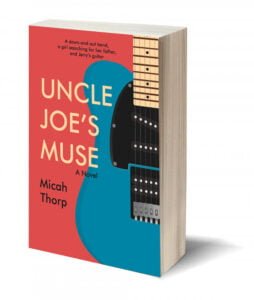 Why did you write Uncle Joe’s Muse?

I wrote the beginning of Uncle Joe’s Muse a few years ago, then promptly forgot about it. Then the pandemic began. The onset was terrifying.

In the midst of the stress I began to write more. Writing has always been something of an escape for me. While it may not be therapy, I find it to be therapeutic. When I started to write, I picked up the story of Uncle Joe and the band. What came out was a story that is (I hope) funny, heartwarming and had nothing to do with the pandemic. A year later, still in the midst of the pandemic, it was finished.

Are any scenes in the book based on real experiences?

There is a scene in the book set at a Dead concert. It’s set in Eugene Oregon, where I grew up. The Dead played there on a pretty regular basis and I went to my share of those concerts. One thing in the scene that doesn’t really jibe with a real Dead concert is Uncle Joe being chased by the police. In reality, the police at Dead concerts inhaled so much second hand smoke they were probably as high as the crowd they were policing. They weren’t really up to chase anyone.

The short answer is no. While I went to concerts on occasion I was never really a Deadhead, nor did I listen to their music outside of their concerts. But when I started getting serious about writing the book, which coincided with the onset of the pandemic, I started listening to the Grateful Dead and really that’s pretty much all I listened to over the last couple years. I assume it has something to do with the nature of the music itself. There’s a kind of philosophical bent to many of the lyrics that balances hope and fear – a balance that’s been really important over the last two years.

Anywhere I have my laptop. I used to write by hand, but switched over a few years ago. My laptop goes just about everywhere with me and I write pretty much anytime I have a spare moment. I’m very undisciplined as a writer in the sense that I don’t force myself to write in any kind of routine. I try to write only when I feel the need, which means I may be obsessive at times and lazy at others.

What writers or books influenced you?

My favorite writers are Ernest Hemingway and Toni Morrison. I used to wonder what the connection was between the two, they lived at different times, wrote about different topics and had vastly different styles. Hemingway was the master of the short declarative sentence and Morrison’s prose is so rich with description and detail you can read it multiple times. I think the thing that makes their writing similar is the clarity imposed by their own editing. Hemingway supposedly worried about every word and comma. Morrison said she couldn’t read the newspaper without editing it as she read. What they both were left with was something I consider nearly perfect prose.

What message were you trying to convey in the book?

Growing up in rural Oregon the shadow of Ken Kesey rests on just about everything literary. His book Sometimes A Great Notion describes the rural Pacific Northwest culture in the middle of the twentieth century. It’s a unique culture that has a whole lot of individualism, ruggedness and – to quote Kesey – cussedness.  The latter part of the twentieth century decimated that culture, with the Spotted Owl, Timber Wars and so on. I’ve started working on a story that tries to capture both some of what’s been lost and what it means.