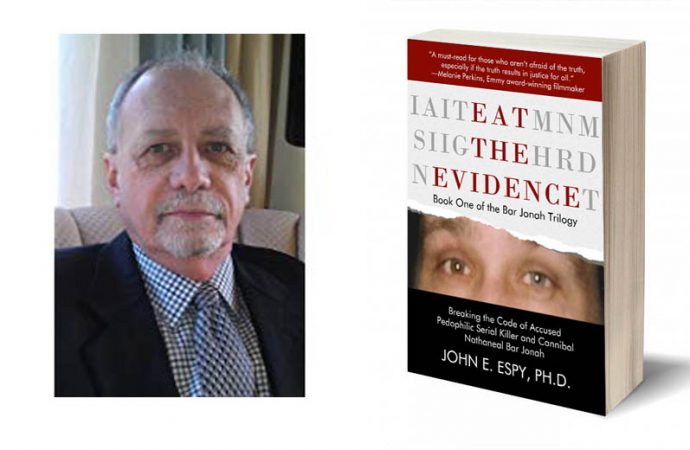 Culled from hundreds of hours of exclusive interviews with Nathaneal Bar Jonah as well as dozens of others who either knew or were involved with him, John E. Espy retells the convicted pedophile and suspected serial killer and cannibal’s entire life—from the time before he was conceived to after his death—and those who were harmed by him in unparalleled detail and scope. Dr. Espy talks with Book Glow about the writing of the Bar Jonah Trilogy.

When were you first introduced to Bar Jonah, and what was the purpose of your involvement with him? 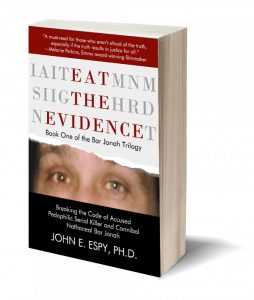 I was first introduced to Bar Jonah in early 2000. I was teaching a class and discussing my previous work with serial murderers when one of my students approached me and said she worked for his defense attorney and he would like to speak with me. I met with him a week later and was on the case to evaluate him in his sentencing plus to testify in his murder trial.

How many hours did you spend with him?

I spent more than 50 face-to-face hours with Bar Jonah. No glass. No monitoring.

What compelled you to write this trilogy?

I wanted to demonstrate how psychically penetrating he was, which made him extremely dangerous. What resulted was thousands of hours of research and interviews. There has never been a book regarding a pedophile or murderer based around this premise, at least by someone who understands the how of what a pedophillic murderer is out to accomplish. Bar Jonah, like many, wanted the victims to ‘participate’ in their own demise. He enjoyed the shock the victims experienced when they knew they were moments from being assaulted or murdered.

You have evaluated a number of notorious serial killers including Jeffrey Dahmer and Ted Bundy. Is there a common thread in their psychological makeup? And what’s the most disturbing aspect for you when you meet with these individuals?

The commonalities among serial murderers are multifold. There is no formulaic exactitude for determining who will become a serial murderer. However, there is a constellation of dynamics and intrapsychic processes that we see consistently operating in serial murderers.

1. There is a significant history of physical, psychic and frequently sexual abuse.

2. The age the abuse begins is an important factor. The earlier the initiation of the abuse, the greater the anger and resultant rage. Importantly, when developmental junctures are either not completed or consistently impinged there results an inability to draw upon a mature psychological self that would have resulted if in fact there had been a successful completion of what are understood to be well-defined and unimpeded developmental staging’s.

3. The parental relationship has not promoted differentiation but rather has promoted fusion and coalescence. Attempts at differentiation are severely punished and equated to parental betrayal and psychic annihilation.

4. The intensity, brutality, and bizarreness of the abuse constellation is of critical importance to examine when conducting a psychological autopsy of a serial murderer. An emergent pattern is typically seen where psychic and physical torture is combined with emasculation. It has been demonstrated that a much higher percentage of serial murderers were abused as children than in the population in general.

5. For the serial murderer, psychological continuity exists within a constellation of intra and interpsychic bizarreness. To reiterate, within this structure the abuse pattern is replete with brutality and bizarreness.

6. What is the relationship between the child and the abuser?

7. What is emerging from functional imaging studies (neuroSPECT, PET, etc.) is a pattern of some form of traumatic brain injury that has resulted in a hypofrontality, whereby the frontal cortex cannot engage one of its critical functions of inhibiting affects that emerge from more primitive areas of the brain. It is also becoming apparent that the insula is in some form damaged. The insula is the structure in the brain which controls one’s ability to identify and experience disgust. It is noted that this is the first time that an impaired insula has been implicated in how a serial murderer operates. For example, Jeffrey Dahmer acknowledged that he began eating his feces “…right before I began school, about five or six, I guess. I liked the taste,” he would say without any sense of disgust. Dahmer’s mother, Joyce Flint, when interviewed by the author, stated that she observed Jeffrey at a young age, sitting on the family porch, ripping the abdomen of his teddy bear open and attempting to eat its stuffing. As Dahmer got older, she said he progressed to small rodents, cats, dogs and at age seventeen, people. Flint referred to her son as a monster.

8. The psychological process by which the serial murderer engages with its intended victim is projective-identification. This concept is one of the most difficult to conceptualize, often times, even for more experienced clinicians. In brief, projective-identification is the process of consciously or unconsciously interlacing affectively charged psychic residue (introjects of a malignant nature) and their accompanying behaviors (without their associated memories) with counter-resonating introjectively identified psychic material that already exists in the intended victim. In other words, projective identification is the implanting of emotionally charged psychological residue into another introjectively fertile person, or whose own counter-resonating introjective residue already exists within them. Specifically, victims who have survived encounters with serial killers describe experiencing a feeling of “just being taken over,” “not being able to resist.” “All of a sudden I lost my sense of who I was.” The serial killer’s mental organization is devoid of any nonmalignant empathic concern for the life of another. The serial killer’s bleak psychological world is one that seeks to devour the inner life of his prey. The victim is merely an inconvenience to in essence acquire the ‘its’ psychological contents. It is a serious misnomer to imply that the serial murderer is seeking ‘sexual satisfaction.’ This process is more expanded upon in my book, Clinical Dicta/Contra Dicta in the chapter, Projective-Identification and Serial Murder: The Missing Link.

From a personal standpoint, while interviewing these individuals it was difficult to consistently sit in the presence of someone who I knew had engaged in heinous crimes against children and adults. It was particularly emotionally challenging when the serial murderer would begin exhibitionisticly describing what and how they engaged in those crimes. Their descriptions were graphic and filled with psychomotor responses mimicking how they would engage in dismemberment and other aspects of the abuse and murder. Fortunately at the time that I was engaged in this research I was deeply involved in my own therapy with the late Dr. Howard Fink, who provided an opportunity to work with the material that I was exposing myself to. I am an unwavering proponent that it be mandatory that a psychotherapist be engaged in their own long-term psychotherapy/analysis.

Related: Read An Excerpt From Eat The Evidence (Book One Of The Bar Jonah Trilogy)