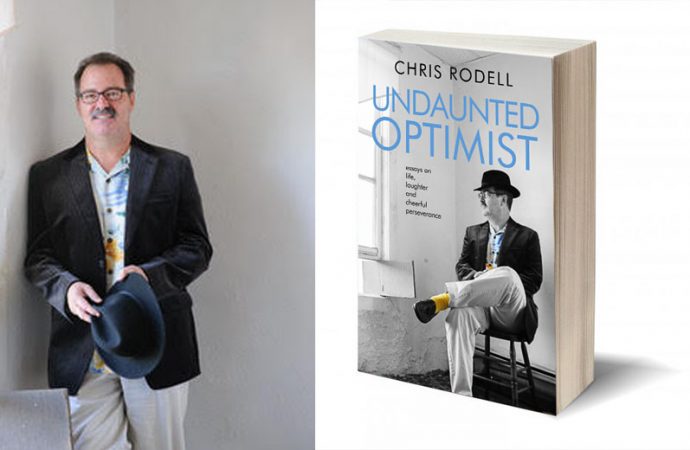 It’s a complicated world out there and it takes a nimble mind to sort it all out. Rodell does it with style, warmth, an engaging euphoria and undaunted optimism that lets every reader know he enjoys being human and enjoys human beings. Chris Rodell talks with Book Glow about his new book, Undaunted Optimist: Essays on Life, Laughter and Cheerful Perseverance. 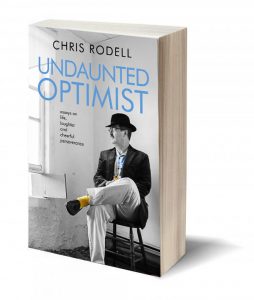 A joyful collection of soul-tickling essays sure to remind every reader it never hurts being happy to be human.

Why does the shark swim? The bulk of these essays are from my blog. I’ve done more than 2,000 posts in 12 years. The blog’s earned more than 750,000 readers from 175 countries all over the world. Devoted readers have urged me to put together a compilation and the coronavirus shutdown seemed perfect timing.

I love to write fiction and am most proud of my 2016 novel, The Last Baby Boomer: The Story of the Ultimate Ghoul Pool.

I’m very fortunate. My office is a room on the third floor of a 250-year-old tavern with three distinct bars and hundreds of interesting people. It’s near Latrobe, Pennsylvania, birthplace of both Arnold Palmer and Fred Rogers. Of course, it’s rumored to be haunted. I’m a skeptic, but one time I felt a pat on the back. I turned around but there was no one there. I told the story to a visiting spiritualist. She said the ghost was telling me, way to go, that I was doing a good job. Now, I tell people, I may not believe in ghosts, but the ghosts believe in me!

Just how elusive decent, stable pay can be. I tell people writing books is easy; selling books is difficult.

I’m about 2/3rds done with my second novel about a long distance Afterlife courtship conducted between a bad boy named Evan and a good girl named Elle. It’s called Evan ’n’ Elle in Heaven ’n’ Hell. Because sometimes for love to flourish you need to lower a little heaven and sometimes you gotta raise a little hell.

Related: Read An Excerpt From Undaunted Optimist By Chris Rodell 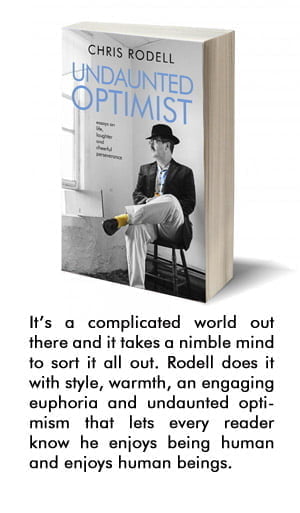