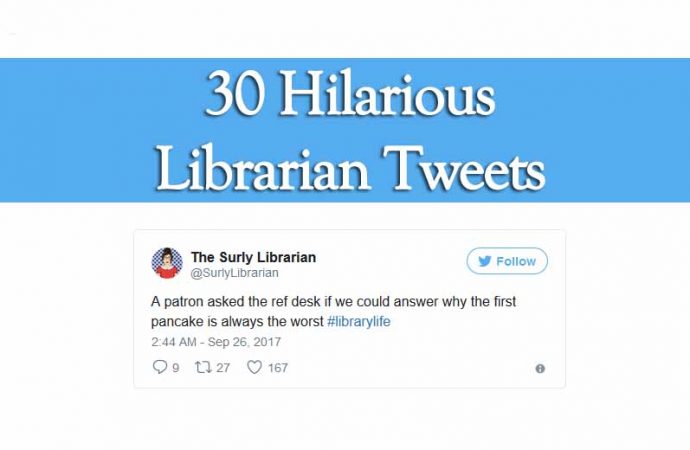 These hilarious librarian tweets prove working at a library is sometimes not all it’s cracked up to be—especially, it seems, when dealing with library patrons.

#Storytime today was something like this if you add a soundtrack of screams and crying. #librarylife pic.twitter.com/WE8E56jnlZ

and to think I got my masters to be a personal phone directory for one woman who is absolutely rude. #librarylife

I tripped over wires in our server room and the internet is down. Please save me 😢 #librarylife pic.twitter.com/YZmwuELhCc

Patrons. People who talk at normal levels across the library but speak below a whisper when asking for help at the desk. #librarylife

I’ll just laugh and leave this here. You know you’ve had one too. #librarylife pic.twitter.com/eXCAbBrWl7

It’s all fun and games until you have to find a board book. #librarylife pic.twitter.com/b7gezfVUtr

no you ate a piece of cold pizza out of your purse on your 10:45 am break #saturdaylibrarian #librarylife

So apparently when they tell you to wear gloves when doing tie dye, they mean it #librarylife #cantfollowdirections pic.twitter.com/7XorkJNXnj

Motivational whiteboard message found in the library. One of the big lectures must have an exam soon. #librarylife pic.twitter.com/uRc187nRbX

My library smells like a turd smoked a cigarette. #librarylife

Dear Patron, I can’t reserve a DVD of the musical “Hamilton” for you because it doesn’t exist. I’m not trying to be difficult. #librarylife

There is a woman strolling through my library with such confidence, even as she rips several farts. Respect for owning it. #librarylife

I’m not sure the signage for this display is entirely coming together. #librarylife pic.twitter.com/zpX8qm6IeE

Don’t let the guy with his rear end hanging out of his pants sans underwear still be on the computer when I go back on desk. #librarylife

Patron: “I wish you had bouncers here, man!” You and me both, sometimes, lady! #librarylife

Is it just me, or is the underside of this butterfly puppet kind of terrifying? #librarylife pic.twitter.com/V9JAf3XoNG

Libraries are either a freezer or a sauna. There is no in between. #thisiswhywewearcardigans #librarylife

So I got this light up sign for my desk at work… #librarylife pic.twitter.com/eXPAQwAcoV

#LibrarianProblems : When a student summons you from across the #library by snapping their fingers at you pic.twitter.com/HGC4ziI5Si

Roblox is the bane of my existence! #librarianproblems

Student: ‘Can you have wine in the library?’
Me: **knowing it’s a joke**#LibrarianProblems pic.twitter.com/n4mH8U8K6I

Middle schoolers will be the death of me #librarianproblems

Also, why am I hearing crickets in the computer lab? #LibrarianProblems

Related: 14 Reasons Why You Should Love A Librarian