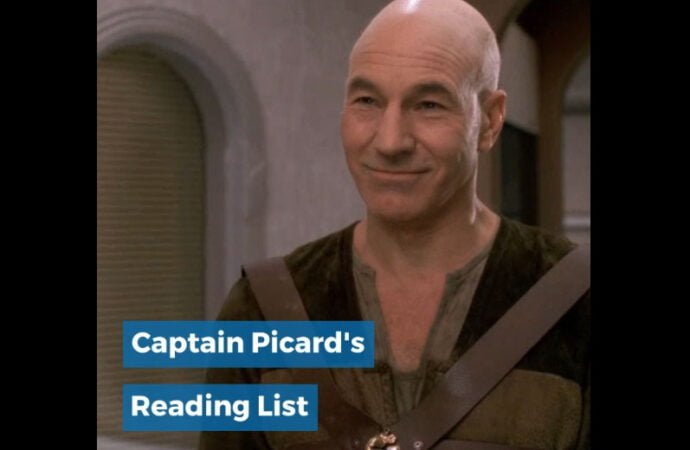 The Globe Illustrated Shakespeare: The Complete Works by William Shakespeare

The Tempest by William Shakespeare

Ethics, Sophistry and the Alternate Universe by Ving Kuda

Moby-Dick or, the Whale by Herman Melville

A Christmas Carol by Charles Dickens

The Big Sleep by Raymond Chandler

The Long Goodbye by Raymond Chandler

The unknown book in “Cause and Effect” (episode)

Related: Trekkies and trekkers will want to read the best Star Trek books.

You may not be surprised that Captain Picard loves to read books. But did you know Marilyn Monroe was an avid reader? Another Hollywood star Audrey Hepburn loved to read books.

She may be a cartoon character, but don’t forget to check out Lisa Simpson’s reading list from The Simpsons. It’s impressive! Meanwhile the boys at fictional Welton Academy in the film Dead Poets Society read these books recommended by John Keating.

The 16th president of the United States, Abraham Lincoln, who grew up in poverty and never went to college, said: “All I have learned, I learned from books.” Here is a sampling of Abraham Lincoln’s favorite books.