89 Of The Best Alice In Wonderland Quotes 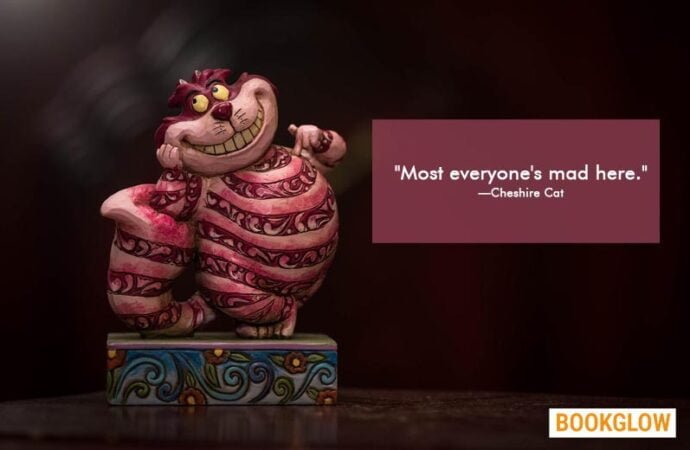 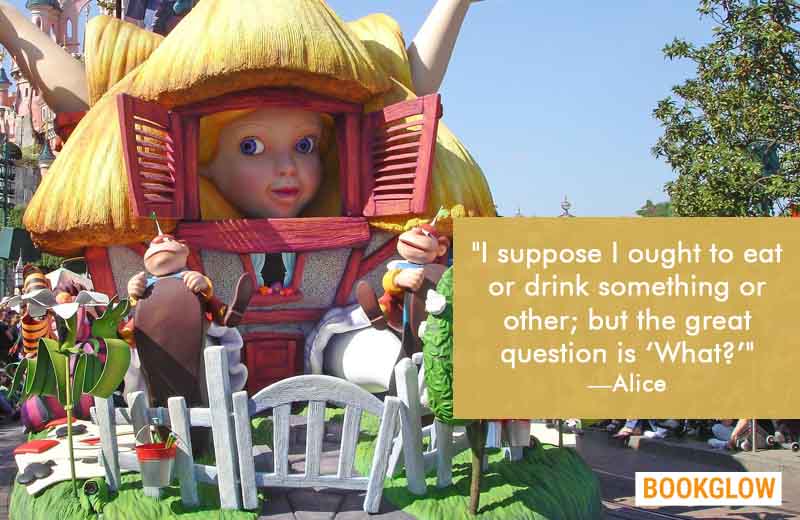 1. “But that’s just the trouble with me. I give myself very good advice, but I very seldom follow it.”

4. “When I used to read fairy tales, I fancied that kind of thing never happened, and now here I am in the middle of one!”

5. “It would be so nice if something made sense for a change.”

7. “Oh, how I wish I could shut up like a telescope! I think I could, if only I knew how to begin.” For, you see, so many out-of-the-way things had happened lately, that Alice had begun to think that very few things indeed were really impossible.

9. It was all very well to say “Drink me,” but the wise little Alice was not going to do that in a hurry. “No, I’ll look first,” she said, “and see whether it’s marked ‘poison’ or not.”

12. “I suppose I ought to eat or drink something or other; but the great question is ‘What?’”

13. “When I get home I shall write a book about this place.”

14. “Three inches is such a wretched height.”

15. “How funny it’ll seem to come out among the people that walk with their heads downwards! The antipathies, I think—”

18. “But how can one possibly pay attention to a book with no pictures in it?”

20. “For if one drinks much from a bottle marked ‘poison,’ it’s almost certain to disagree with one sooner or later.”

22. “But it’s no use now,” thought poor Alice, “to pretend to be two people! Why, there’s hardly enough of me left to make one respectable person!”

A beautiful handmade lantern to inspire and light up your curiosity. Starting at $80.00. 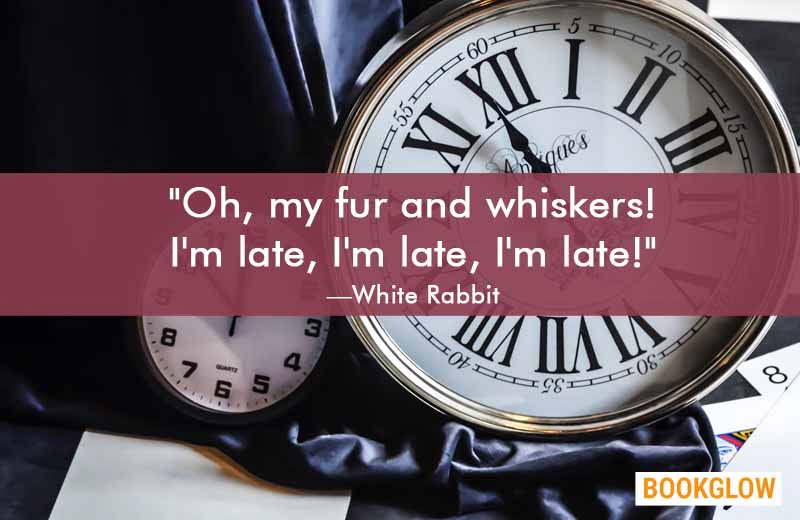 25. “The Duchess! The Duchess! Oh my dear paws! Oh my fur and whiskers! She’ll get me executed, as sure as ferrets are ferrets!” This White Rabbit fell down a rabbit hole and found his way to your house! The White Rabbit is made of white wool by needle felting technique with handmade clothes. His size can change, depending on your preference. Starting at $340.00. Also, if you’re a fan of rabbits, then you shouldn’t miss these other best rabbits in literature. 28. “Twinkle twinkle little bat. How I wonder what you’re at. Up and above the world you fly, like a tea tray in the sky.”

29. “You can always take more than nothing.” The perfect party props for your next Alice in Wonderland Mad Hatter tea party inspired party! Starting at $12.69. 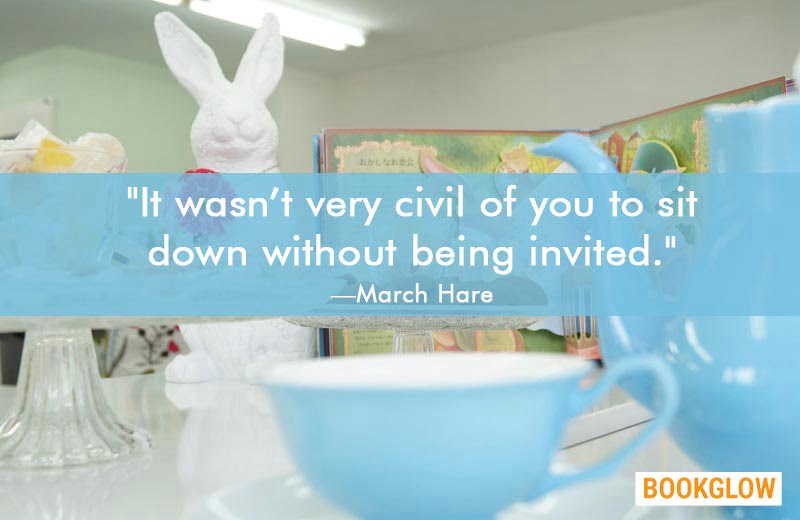 33. “I have an excellent idea! Let’s change the subject.”

35. “It wasn’t very civil of you to sit down without being invited.” Handcrafted from reconstituted stone to enhance the strength and durability of the piece. Starting at $41.46. 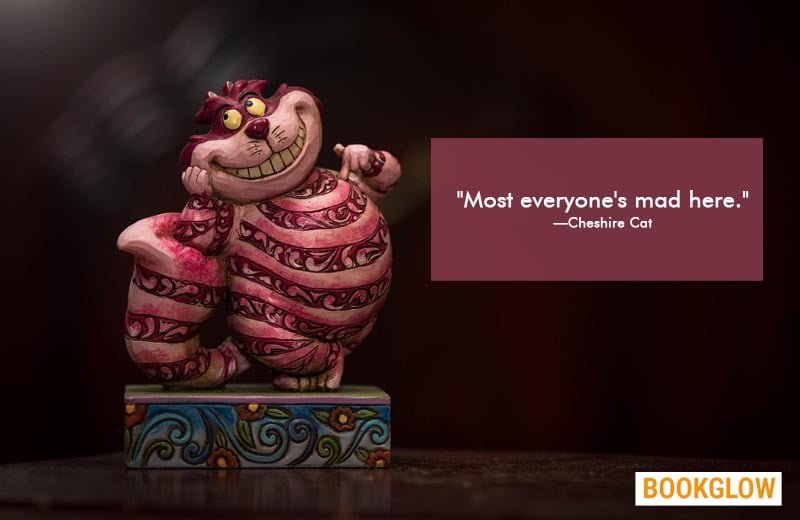 39. “You may have noticed that I’m not all there myself.”

41. “Haste makes waste, so I rarely hurry. But if a ferret were about to dart up my dress, I’d run.”

44. “The proper order of things is often a mystery to me.”

45. “The uninformed must improve their deficit, or die.”

47. “Every adventure requires a first step.”

49. “Let your need guide your behavior.”

50. “I went to a hunting party once, I didn’t like it. Terrible people. They all started hunting me!”

52. “When the day becomes the night and the sky becomes the sea, when the clock strikes heavy and there’s no time for tea; and in our darkest hour, before my final rhyme, she will come back home to Wonderland and turn back the hands of time.”

54. “Never let anyone drive you crazy; it is nearby anyway and the walk is good for you.”

55. “Well, some go this way, and some go that way. But as for me, myself, personally, I prefer the short-cut.”

60. “Somehow you strayed and lost your way, and now there’ll be no time to play, no time for joy, no time for friends – not even time to make amends.”

64. “Imagination is the only weapon in the war with reality.”

65. “I am not crazy; my reality is just different from yours.”

Perfect for your next Halloween costume, or anytime you feel like you want to be one of the best literary cats of all time! Wrist cuffs and leg fluffies also available. Starting at $22.95. 73. “Begin at the beginning,” the King said, very gravely, “and go on till you come to the end: then stop.”

74. “If you didn’t sign it,” said the King, “that only makes the matter worse. You must have meant some mischief, or else you’d have signed your name like an honest man.” 76. “If everybody minded their own business,” the Duchess said, in a hoarse growl, “the world would go round a deal faster than it does.”

79. “Ah well! It means much the same thing,” said the Duchess, digging her sharp little chin into Alice’s shoulder as she added, “and the moral of that is—‘Take care of the sense, and the sounds will take care of themselves.’” Caterpillar from Alice in Wonderland 84. “Speak English!” said the Eaglet. “I don’t know the meaning of half those long words, and, what’s more, I don’t believe you do either!”

85. “The time has come, to talk of other things–of shoes and ships and sealing wax, and cabbages and kings. And why the sea is boiling hot, and whether pigs have wings. Calloo, Callay, no work today, we’re the cabbages and kings.” Custom sculpted, hand molded, signed and painted door knob inspired by the doorknob in Alice in Wonderland. Starting at $69.99. Perfect for a child’s birthday party! Starting at $29.00.