6 Literary Road Trips Across America You Can Actually Take 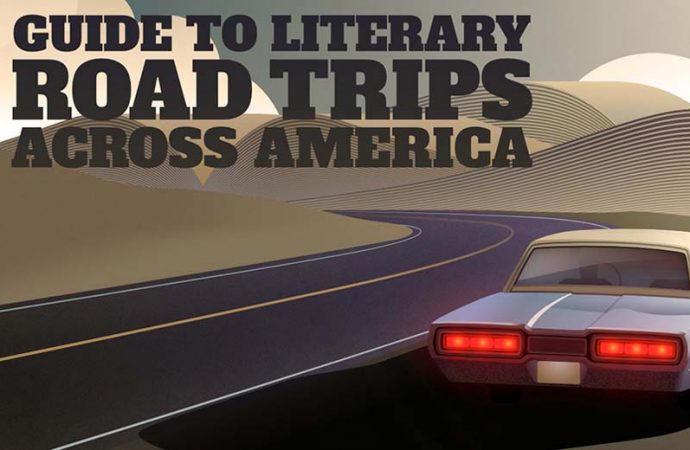 Have you caught it yet, the summer travel bug? If so you’re not alone. Every summer thousands of Americans set off on cross-country trips to disconnect from their daily routines and try their hand at the open road. In fact, some might even say that road trips are at the heart of American culture. From pioneers who paved the way out west to college students who trade their academic routines for the freedom of summer travels, cross-country road trips are ingrained in our ideals.

Adventure by car is truly a different kind of travel. A set of wheels provides us with a freeing feeling that can’t be obtained elsewhere. It’s no wonder so many literary heroes like Tom Wolfe and Jack Kerouac have written classic novels and memoirs that documented their adventures along the way.

Road trips aren’t simply about exploration, they are symbolic. A car is the visible expression of freedom, a drivers license the ticket and the trip the destination. Inspired by well known works of literature, CarRentals created their guide to literary road trips across America, but instead of simply living them through the pages of a book, you can use their routes that follow the narrative arc of six iconic books to recreate each author’s experience and write new stories of your own.

1. Fear and Loathing in Las Vegas by Hunter S. Thompson 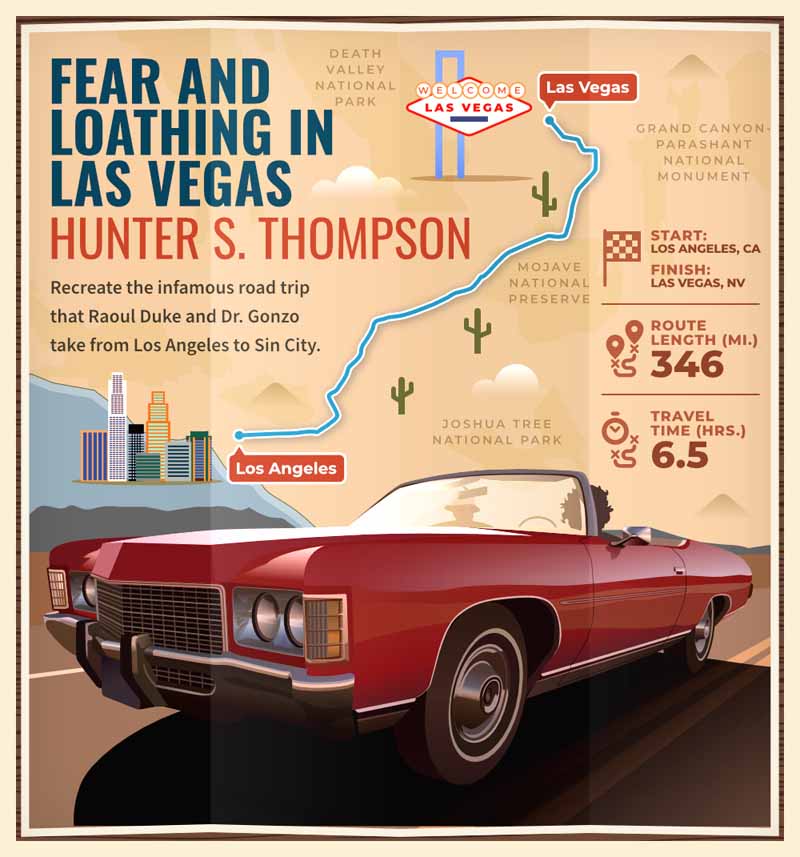 What many people don’t know about this quintessential book of the ‘70s, is that Fear and Loathing in Las Vegas actually spawned from a combination of two magazine assignments. One from Rolling Stone and the other from Sports Illustrated. The story follows its protagonist, Raoul Duke, and his attorney, Dr. Gonzo from Los Angeles to Las Vegas on assignment as their work intentions turn to drugs, alcohol and gambling when they descend upon Sin City. Although this loose narrative largely blurs the lines between reality and an interior journey, you can still relive the characters attempt to chase the American dream by hitting these stops along the way with the help of our map.

2. On the Road by Jack Kerouac 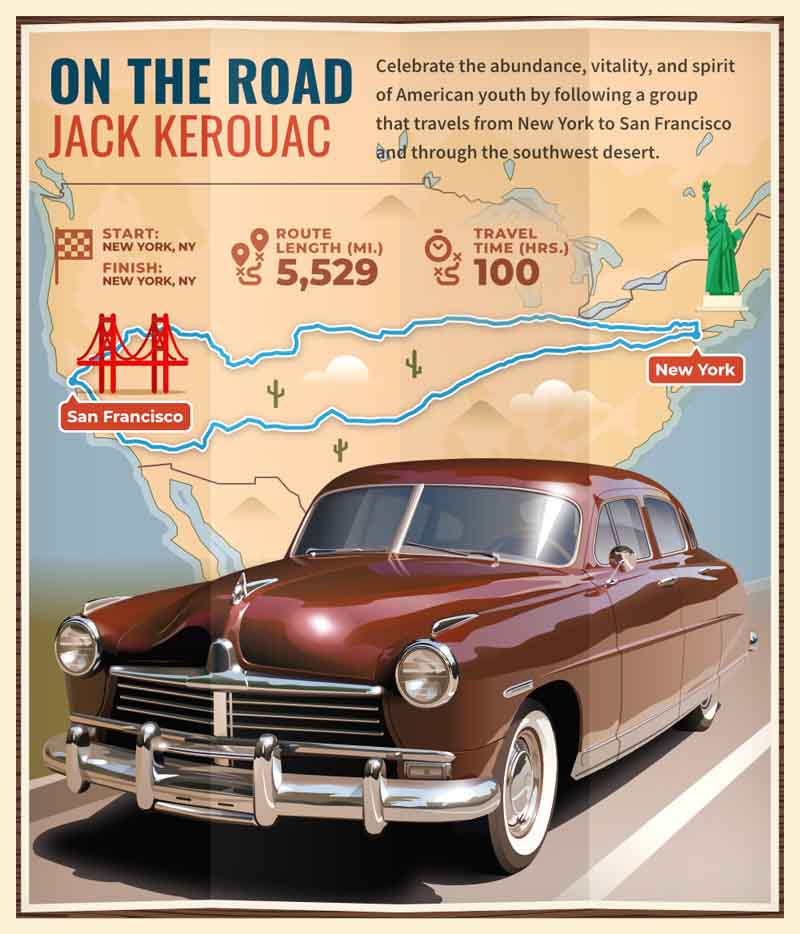 A classic text in American literature, Jack Kerouac’s On the Road, is an important book in the counterculture movement. Set in the aftermath of the Second World War, the book follows Sal Paradise and a crew of young, broke hippies in love with life, jazz and drugs as they travel across America. This work of literature captures the struggle to retain the freedom of the American dream while celebrating the abundance, vitality, and spirit of American youth as the group travels from New York to San Francisco and through the southwest desert. Use our map of this lengthy road trip to go from coast to coast and back again.

3. Zen and the Art of Motorcycle Maintenance by Robert M. Pirsig 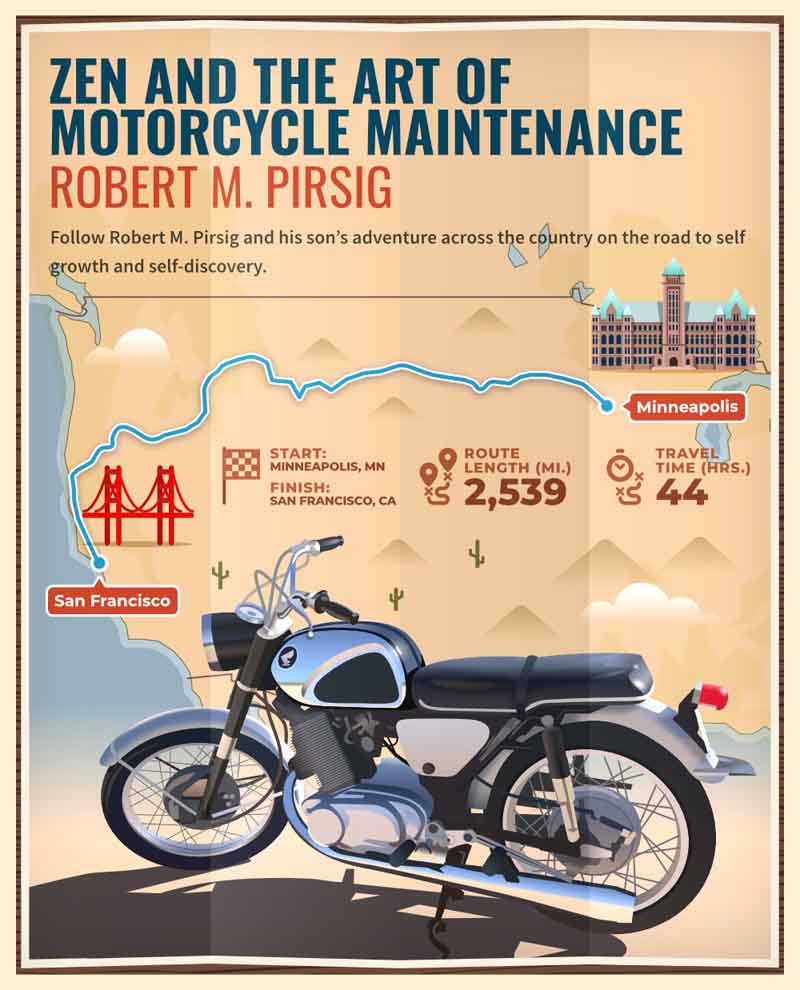 Zen and the Art of Motorcycle Maintenance is the self-told story of a middle-aged man and his son who go on a motorcycle trip as they journey from Minnesota to California, taking the back roads and sleeping overnight in motels or camping. This literary road trip is well known for narrator’s philosophical reflections, self-growth and the value of quality over quantity, making this a perfect road trip for the solo adventurer or someone who is at a crossroads in life. Use our guided map to follow the same path to San Francisco. 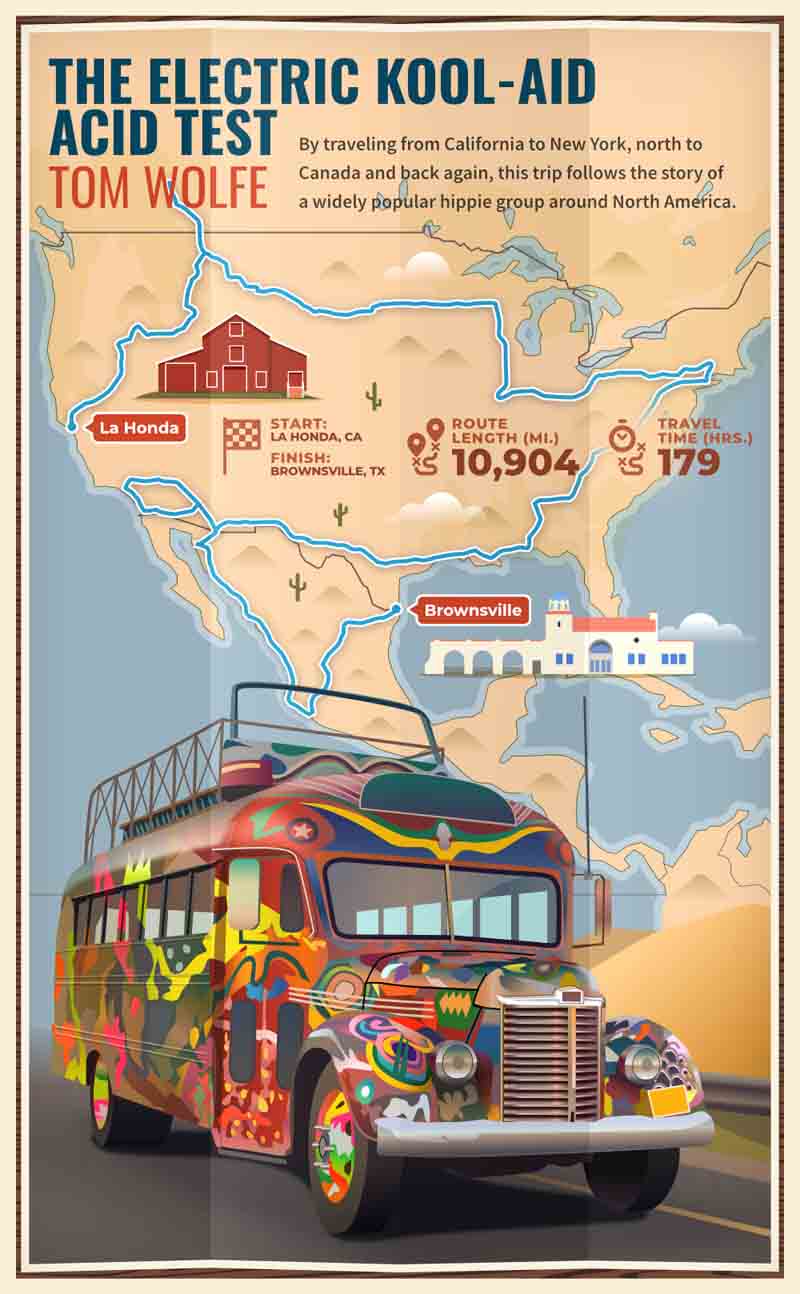 Tom Wolfe’s book, The Electric Kool-Aid Acid Test, is often mythologized as the starting point of the psychedelic ‘60s. The story follows a charismatic leader, Ken Kesey, and his band of followers, the Merry Pranksters, as they drive a Day-Glo painted bus across the country under the influence of acid, eclectic music and multimedia experiences to transcend reality and bring a higher state of consciousness during the height of the counterculture movement in America. By traveling across the country from California to New York, north to Canada and back again, this trip follows the story of a widely popular hippie group that befriends the Hell’s Angels motorcycle gang, leads a retreat of Unitarian church leaders and finds themselves fleeing to Mexico to avoid jail time. For those ambitious enough to take on the whole trip, you can cover a large part of the U.S. while still crossing both borders by following our roadmap. Just don’t forget to bring your passport!

5. The Lost Continent by Bill Bryson 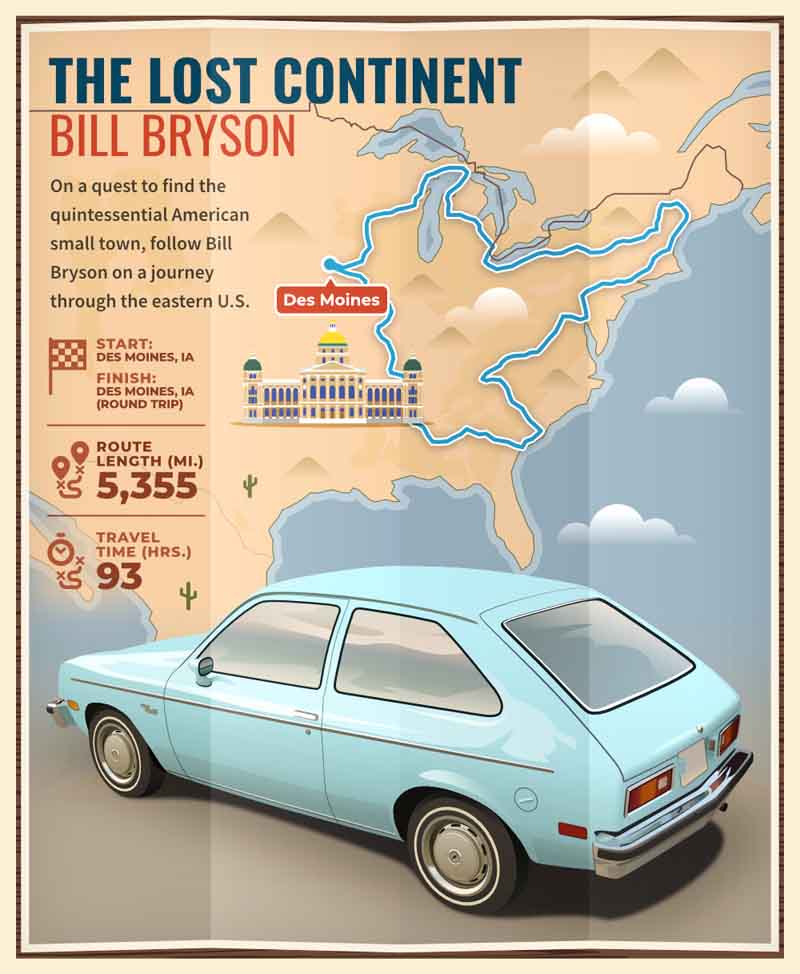 It’s not uncommon for Americans with a literary flair to expatriate themselves and never return — i.e. Paul Theroux, T.S. Elliot and Ernest Hemingway. However, this was not the case for Bill Bryson, who returned to the states after a two-year stint of London journalism. In his attempt to find the quintessential American small town, he gave us the book The Lost Continent, detailing his more than 5,355-mile ramble. While his experience reads more doom and gloom for many, he mapped out vast majority of small towns in the eastern U.S. for those looking to take a quaint and quiet road trip. Use our map to explore the route for yourself.

6. The Cruise of the Rolling Junk by F. Scott Fitzgerald 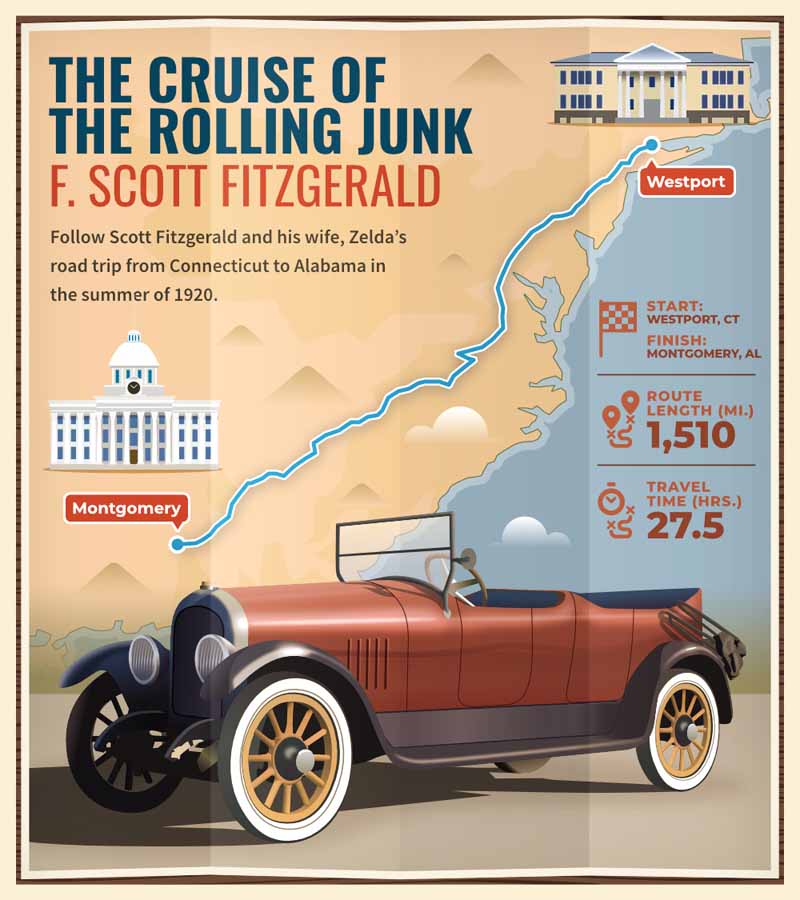 More of an early series of journalistic pieces for Motor magazine, this journey follows the author, Scott Fitzgerald and his wife, Zelda, on their 1,500-mile road trip from Connecticut to Alabama in the summer of 1920. While this tale blends both fact and fiction, it does a fantastic job at capturing the joys of being on the road and the role of the automobile in American life. Use our map to follow the Fitzgeralds in their clapped-out automobile called the “Rolling Junk” to experience the same feelings of hope and freedom while on the road.