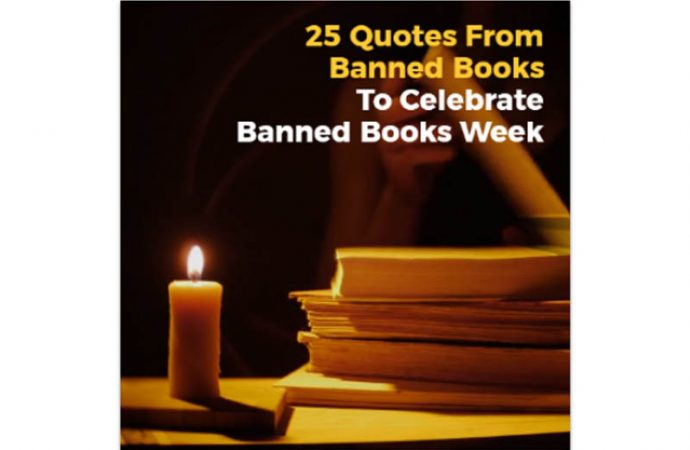 Banned Books Week is an annual event held during the last week of September. Celebrating the freedom to read, it draws attention to actual or attempted bannings of books across the United States. According to the American Library Association, more than 11,300 books have been challenged since 1982. These 25 quotes from banned books celebrate Banned Books Week.

Banned or challenged books mentioned in this video:

1. To Kill A Mockingbird by Harper Lee

2. Of Mice and Men by John Steinbeck

4. The Handmaid’s Tale by Margaret Atwood

6. Flowers for Algernon by Daniel Keyes

7. Lord of the Flies by William Golding

9. Little Town on the Prairie by Laura Ingalls Wilder

10. Their Eyes Were Watching God by Zora Neale Hurston

11. I Know Why the Caged Bird Sings by Maya Angelou

12. Where the Wild Things Are by Maurice Sendak

13. The Awakening by Kate Chopin

14. A Light in the Attic by Shel Silverstein

15. Are You There God, It’s Me, Margaret by Judy Blume

16. A Wrinkle in Time by Madeleine L’engle

17. The Glass Castle by Jeannette Walls

18. The Witches by Roald Dahl

19. Anne Frank: The Diary of a Young Girl by Anne Frank

21. Leaves of Grass by Walt Whitman

24. The Giver by Lois Lowry