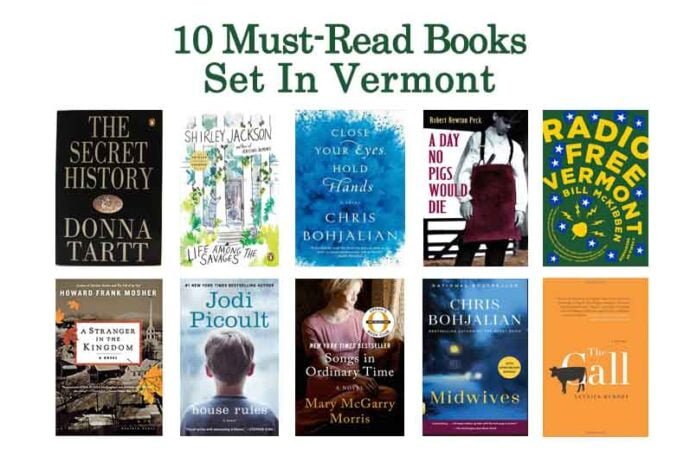 These 10 must-read books set in Vermont include bestsellers, captivating memoirs, and unputdownable fiction. Take a trip to the Green Mountain State with these books that take place in Vermont.

1. The Secret History by Donna Tartt 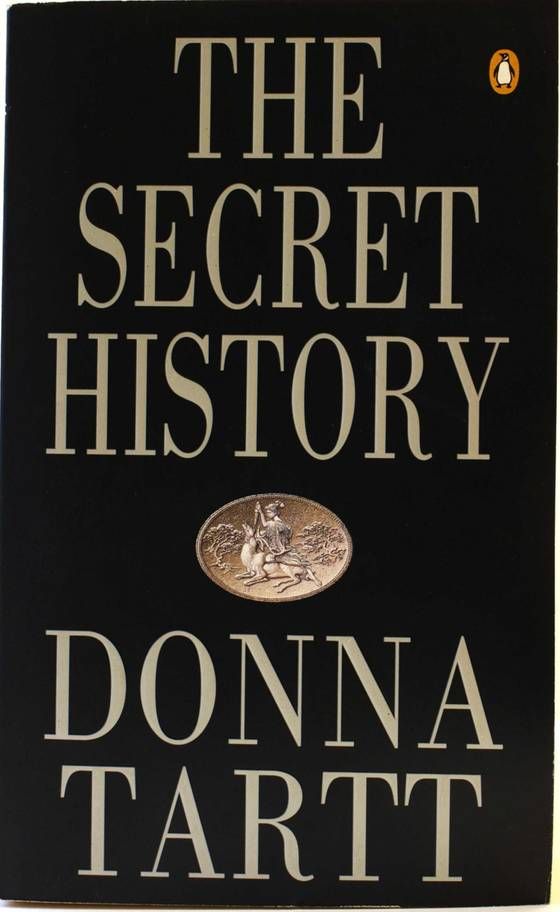 2. Life Among the Savages by Shirley Jackson “In her celebrated fiction, Shirley Jackson explored the darkness lurking beneath the surface of small-town America. But in Life Among the Savages, she takes on the lighter side of small-town life. In this witty and warm memoir of her family’s life in rural Vermont, she delightfully exposes a domestic side in cheerful contrast to her quietly terrifying fiction. With a novelist’s gift for character, an unfailing maternal instinct, and her signature humor, Jackson turns everyday family experiences into brilliant adventures.” 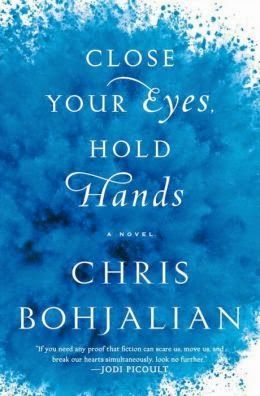 “Emily Shepard is on the run; the nuclear plant where her father worked has suffered a cataclysmic meltdown, and all fingers point to him. Now, orphaned, homeless, and certain that she’s a pariah, Emily’s taken to hiding out on the frigid streets of Burlington, Vermont, creating a new identity inspired by her favorite poet, Emily Dickinson.

“Then she meets Cameron. Nine years old and with a string of foster families behind him, he sparks something in Emily, and she protects him with a fierceness she didn’t know she possessed. But when an emergency threatens the fledgling home she’s created, Emily realizes that she can’t hide forever.”

4. A Day No Pigs Would Die by Robert Newton Peck 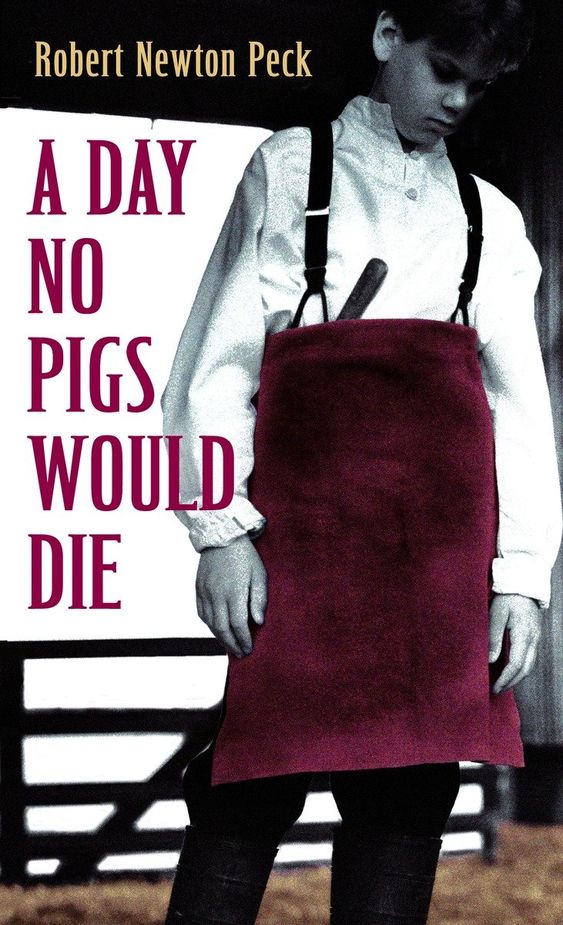 “Originally published in hardcover in 1972, A Day No Pigs Would Die was one of the first young adult books, along with titles like The Outsiders and The Chocolate War. In it, author Robert Newton Peck weaves a story of a Vermont boyhood that is part fiction, part memoir. The result is a moving coming-of-age story that still resonates with teens today.” 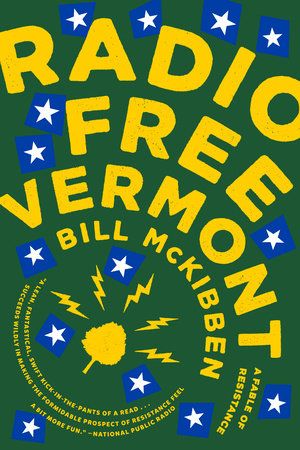 “As the host of Radio Free Vermont–‘underground, underpowered, and underfoot’–seventy-two-year-old Vern Barclay is currently broadcasting from an “undisclosed and double-secret location.” With the help of a young computer prodigy named Perry Alterson, Vern uses his radio show to advocate for a simple yet radical idea: an independent Vermont, one where the state secedes from the United States and operates under a free local economy. But for now, he and his radio show must remain untraceable, because in addition to being a lifelong Vermonter and concerned citizen, Vern Barclay is also a fugitive from the law.”

6. Stranger in the Kingdom by Howard Frank Mosher 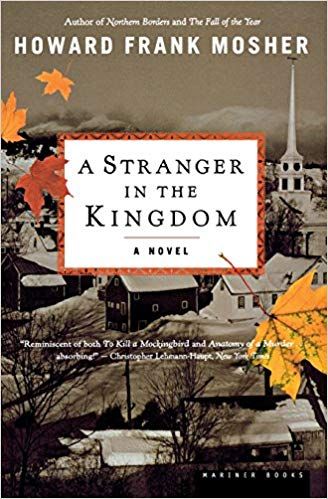 “In Kingdom County, Vermont, the town’s new Presbyterian minister is a black man, an unsettling fact for some of the locals. When a French-Canadian woman takes refuge in his parsonage―and is subsequently murdered―suspicion immediately falls on the clergyman. While his thirteen-year-old son struggles in the shadow of the town’s accusations, and his older son, a lawyer, fights to defend him, a father finds himself on trial more for who he is than for what he might have done.” 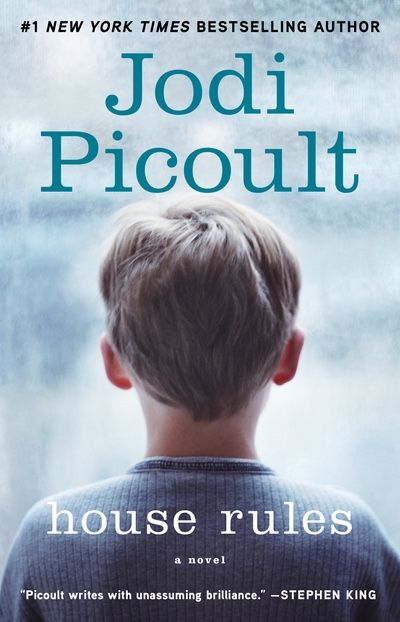 “Jacob Hunt is a teen with Asperger’s syndrome. He’s hopeless at reading social cues or expressing himself well to others, though he is brilliant in many ways. But he has a special focus on one subject—forensic analysis. A police scanner in his room clues him in to crime scenes, and he’s always showing up and telling the cops what to do. And he’s usually right.

“But when Jacob’s small hometown is rocked by a terrible murder, law enforcement comes to him. Jacob’s behaviors are hallmark Asperger’s, but they look a lot like guilt to the local police. Suddenly the Hunt family, who only want to fit in, are directly in the spotlight. For Jacob’s mother, Emma, it’s a brutal reminder of the intolerance and misunderstanding that always threaten her family. For his brother, Theo, it’s another indication why nothing is normal because of Jacob.” 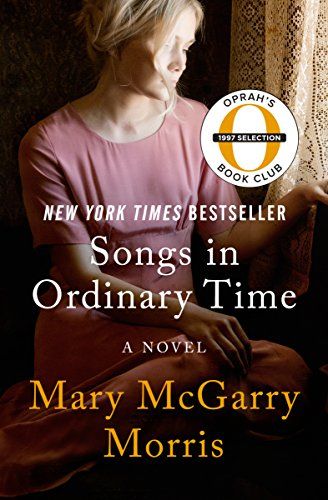 “It is the summer of 1960 in Atkinson, Vermont. With no help from her alcoholic ex-husband, Marie Fermoyle is raising three children on the edge of poverty. Her seventeen-year-old daughter, Alice, is becoming emotionally involved with a local priest in a staunchly Catholic town that disapproves of Marie’s divorce. Alice’s brother Norm is a hotheaded sixteen-year-old, and twelve-year-old Benjy is isolated and full of anxieties, looking with yearning at the Klubocks next door, who seem to live an orderly, peaceful life much unlike his own family’s.

“Now, Marie has met a new man: Omar Duvall, who talks about opportunities and riches but so far seems only to sponge off the Fermoyles. A lonely, desperate single mother like Marie is easy prey for con men, but she resists the temptation to doubt him. Young Benjy, though, may eventually reveal a disturbing secret that could shatter all her hopes.” 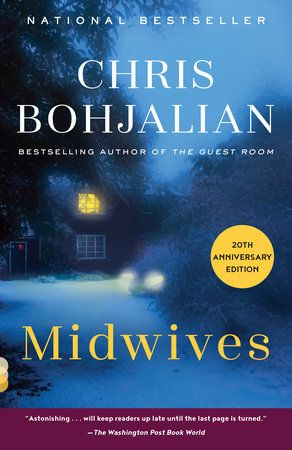 “On an icy winter night in an isolated house in rural Vermont, a seasoned midwife named Sibyl Danforth takes desperate measures to save a baby’s life. She performs an emergency cesarean section on a mother she believes has died of stroke. But what if—as Sibyl’s assistant later charges—the patient wasn’t already dead? The ensuing trial bears the earmarks of a witch hunt, forcing Sibyl to face the antagonism of the law, the hostility of traditional doctors, and the accusations of her own conscience. Exploring the complex and emotional decisions surrounding childbirth, Midwives engages, moves, and transfixes us as only the very best novels ever do.”

10. The Call by Yannick Murphy 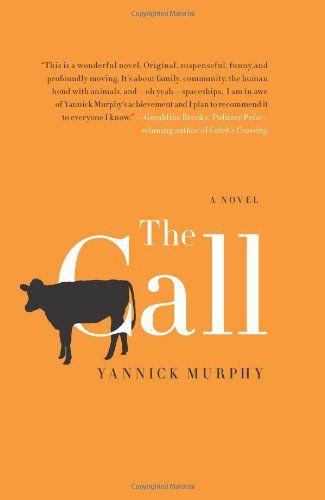 “The warm, wry, and patient voice of a veterinarian father tells the heartfelt story of his young New England family enduring a moving trial of loyalty, hope, and faith after they are confronted with an unthinkable crisis.”