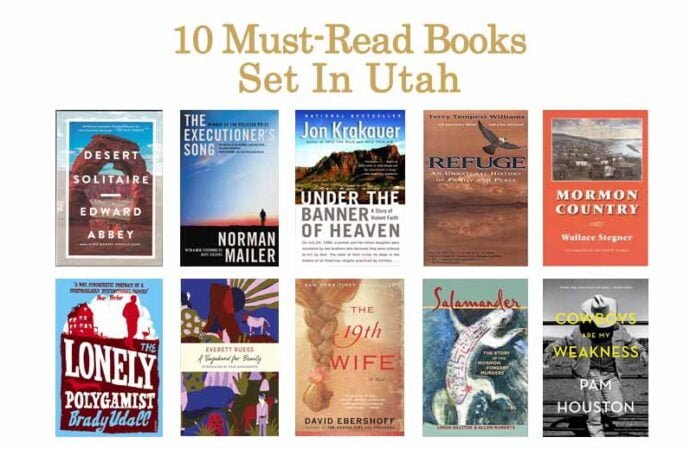 These 10 must-read books set in Utah include Pulitzer Prize winners and national bestsellers from desert canyonlands of Utah to Salt Lake City and detail the incredible landscapes and rich cultural heritage of the state. Visit the Beehive State with these books that take place in Utah. 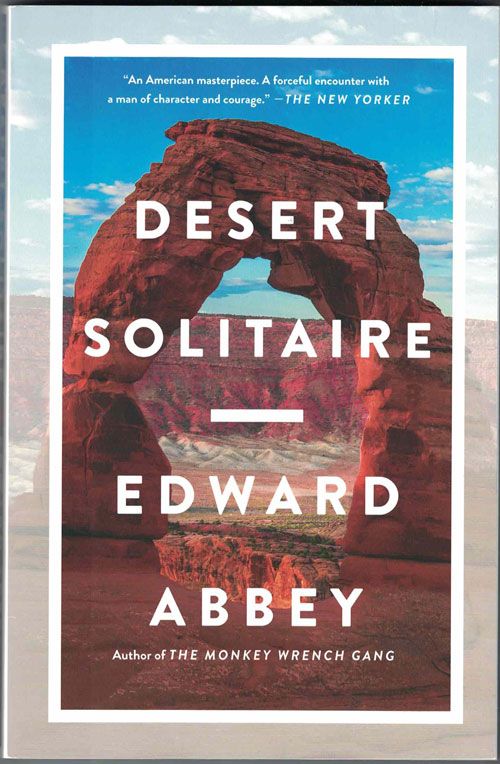 “Desert Solitaire is a collection of vignettes about life in the wilderness and the nature of the desert itself by park ranger and conservationist, Edward Abbey. The book details the unique adventures and conflicts the author faces, from dealing with the damage caused by development of the land or excessive tourism, to discovering a dead body. However Desert Solitaire is not just a collection of one man’s stories, the book is also a philosophical memoir, full of Abbey’s reflections on the desert as a paradox, at once beautiful and liberating, but also isolating and cruel. Often compared to Thoreau’s Walden, Desert Solitaire is a powerful discussion of life’s mysteries set against the stirring backdrop of the American southwestern wilderness.”

2. The Executioners Song by Norman Mailer 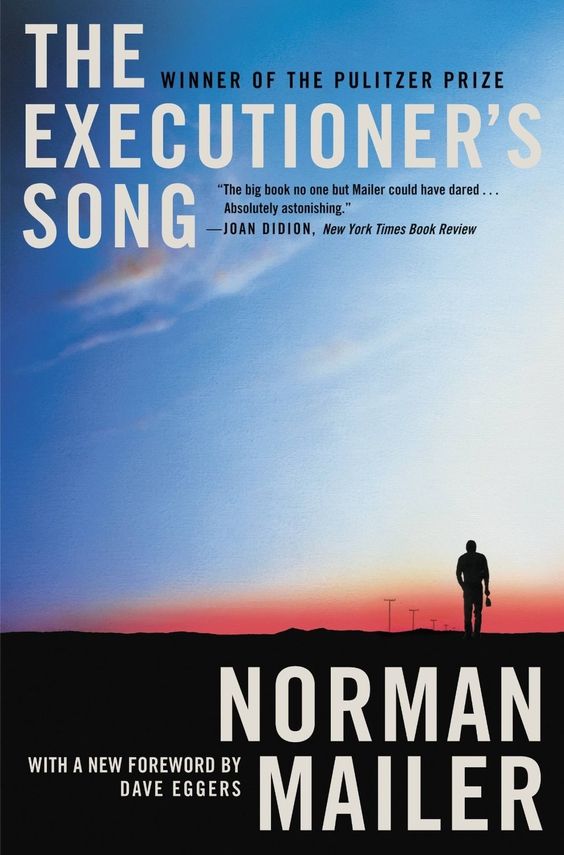 “Arguably the greatest book from America’s most heroically ambitious writer, The Executioner’s Song follows the short, blighted life of Gary Gilmore who became famous after he robbed two men in 1976 and killed them in cold blood. After being tried and convicted, he immediately insisted on being executed for his crime. To do so, he fought a system that seemed intent on keeping him alive long after it had sentenced him to death. And that fight for the right to die is what made him famous.

“Mailer tells not only Gilmore’s story, but those of the men and women caught in the web of his life and drawn into his procession toward the firing squad. All with implacable authority, steely compassion, and a restraint that evokes the parched landscape and stern theology of Gilmore’s Utah. The Executioner’s Song is a trip down the wrong side of the tracks to the deepest source of American loneliness and violence. It is a towering achievement-impossible to put down, impossible to forget.”

3. Under the Banner of Heaven by Jon Krakauer 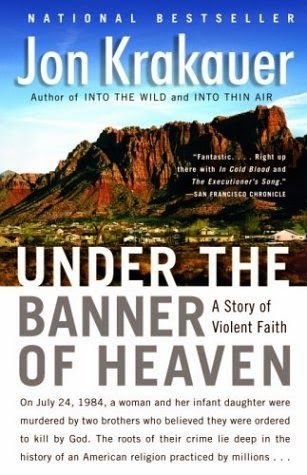 “This extraordinary work of investigative journalism takes readers inside America’s isolated Mormon Fundamentalist communities, where some 40,000 people still practice polygamy. Defying both civil authorities and the Mormon establishment in Salt Lake City, the renegade leaders of these Taliban-like theocracies are zealots who answer only to God. At the core of Krakauer’s book are brothers Ron and Dan Lafferty, who insist they received a commandment from God to kill a blameless woman and her baby girl.

“Beginning with a meticulously researched account of this appalling double murder, Krakauer constructs a multi-layered, bone-chilling narrative of messianic delusion, polygamy, savage violence, and unyielding faith. Along the way he uncovers a shadowy offshoot of America’s fastest growing religion, and raises provocative questions about the nature of religious belief.” 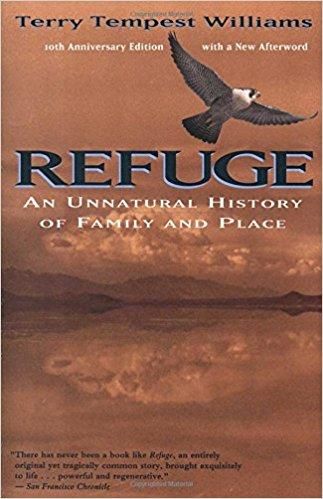 “In the spring of 1983 Terry Tempest Williams learned that her mother was dying of cancer. That same season, The Great Salt Lake began to rise to record heights, threatening the Bear River Migratory Bird Refuge and the herons, owls, and snowy egrets that Williams, a poet and naturalist, had come to gauge her life by. One event was nature at its most random, the other a by-product of rogue technology: Terry’s mother, and Terry herself, had been exposed to the fallout of atomic bomb tests in the 1950s. As it interweaves these narratives of dying and accommodation, Refuge transforms tragedy into a document of renewal and spiritual grace, resulting in a work that has become a classic.” 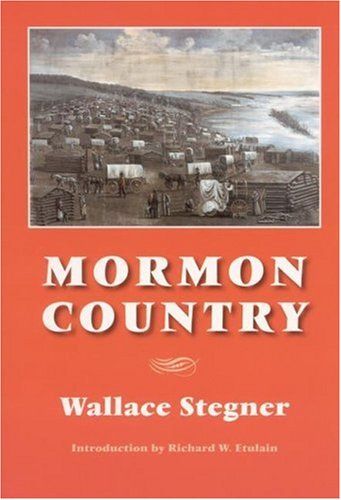 “Where others saw only sage, a salt lake, and a great desert, the Mormons saw their ‘lovely Deseret,’ a land of lilacs, honeycombs, poplars, and fruit trees. Unwelcome in Ohio, Missouri, and Illinois, they migrated to the dry lands between the Rockies and the Sierra Nevada to establish Mormon country, a wasteland made green. Like the land the Mormons settled, their habits stood in stark contrast to the frenzied recklessness of the American West. Opposed to the often prodigal individualism of the West, Mormons lived in closely knit – some say ironclad – communities. The story of Mormon country is one of self-sacrifice and labor spent in the search for an ideal in the most forbidding territory of the American West.”

6. The Lonely Polygamist by Brady Udall 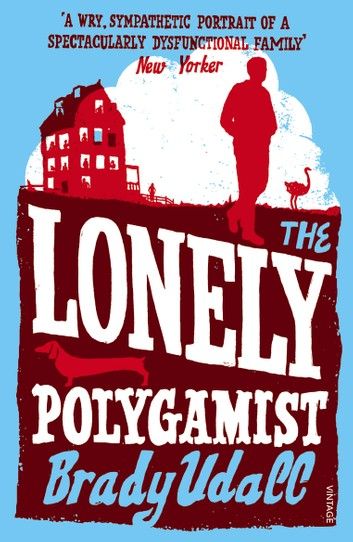 “Golden Richards, husband to four wives, father to twenty-eight children, is having the mother of all midlife crises. His construction business is failing, his family has grown into an overpopulated mini-dukedom beset with insurrection and rivalry, and he is done in with grief: due to the accidental death of a daughter and the stillbirth of a son, he has come to doubt the capacity of his own heart. Brady Udall, one of our finest American fiction writers, tells a tragicomic story of a deeply faithful man who, crippled by grief and the demands of work and family, becomes entangled in an affair that threatens to destroy his family’s future. Like John Irving and Richard Yates, Udall creates characters that engage us to the fullest as they grapple with the nature of need, love, and belonging.”

7. Everett Ruess: A Vagabond for Beauty by W.L. Rusho 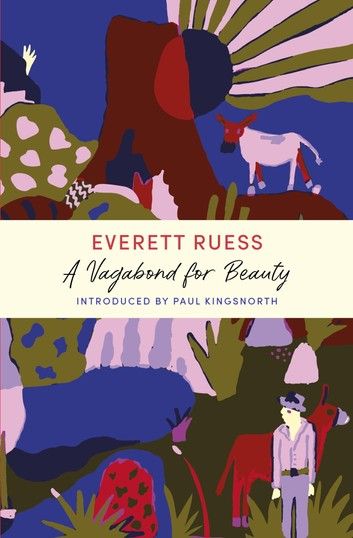 “Everett Ruess, the young poet and artist who disappeared into the desert canyonlands of Utah in 1934, has become widely known posthumously as the spokesman for the spirit of the high desert. Many have been inspired by his intense search for adventure, leaving behind the amenities of a comfortable life. His search for ultimate beauty and oneness with nature is chronicled in this remarkable collection of letters to family and friends.”

8. The 19th Wife by David Ebershoff 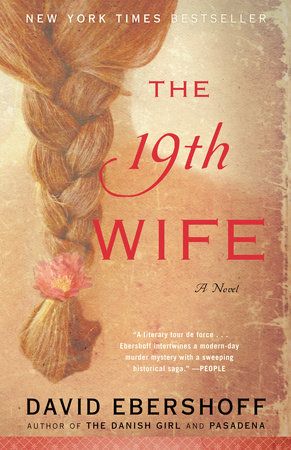 “It is 1875, and Ann Eliza Young has recently separated from her powerful husband, Brigham Young, prophet and leader of the Mormon Church. Expelled and an outcast, Ann Eliza embarks on a crusade to end polygamy in the United States. A rich account of her family’s polygamous history is revealed, including how both she and her mother became plural wives. Yet soon after Ann Eliza’s story begins, a second exquisite narrative unfolds–a tale of murder involving a polygamist family in present-day Utah. Jordan Scott, a young man who was thrown out of his fundamentalist sect years earlier, must reenter the world that cast him aside in order to discover the truth behind his father’s death. And as Ann Eliza’s narrative intertwines with that of Jordan’s search, readers are pulled deeper into the mysteries of love, family, and faith.”

9. Salamander: The Story of the Mormon Forgery Murders by Allen Dale Roberts and Linda Sillitoe 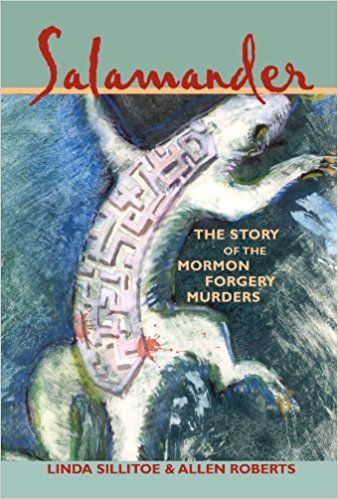 “Drawing from thousands of pages of police reports, court documents, interviews, letters, and diaries, Sillitoe’s and Roberts’s narrative cuts through the complexities of this famous crime investigation to deliver a gripping, Capote-esque tale. They embrace the details but lay them out systematically as seen through the eyes of the detectives, victims, and the perpetrator. The darkest secrets unravel gradually—allowing the reader fleeting glimpses of the infamous white salamander as it ducks in and out of its fabricator’s head.”

10. Cowboys Are My Weakness: Stories by Pam Houston 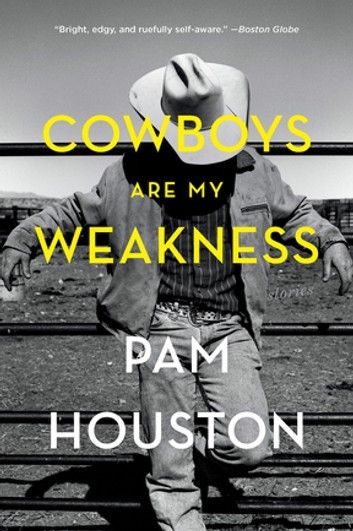 “In Pam Houston’s best-selling story collection, we meet smart women who are looking for the love of a good man, and men who are wild and hard to pin down. Our heroines are part daredevil, part philosopher, all acute observers of the nuances of modern romance. Cowboys Are My Weakness is a shrewd and intoxicating look at men and women―together and apart.”