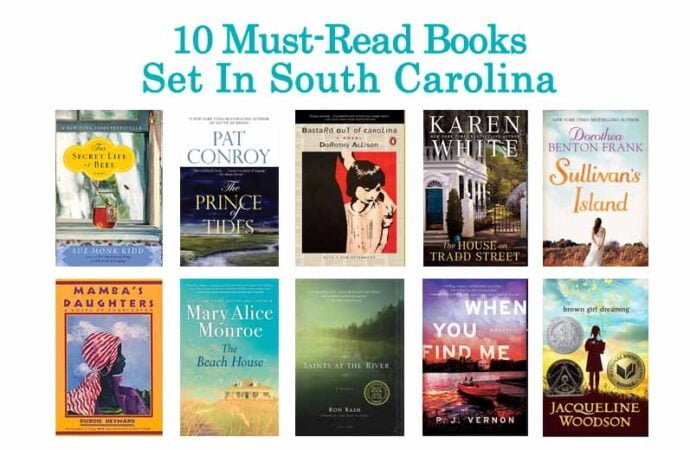 These 10 must-read books set in South Carolina include bestselling fiction, modern classics, award-winning poetry, unputdownable mysteries, and escapist beach reads. Take a trip to Charleston, the South Carolina Low Country, and Sullivan’s Island, among many other Palmetto State destinations, with these books that take place in South Carolina.

1. The Secret Life of Bees by Sue Monk Kidd 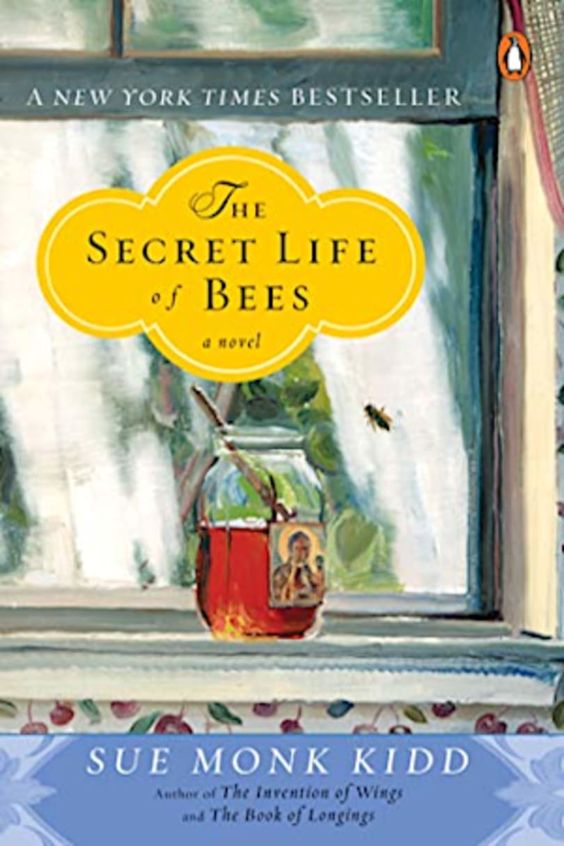 “Set in South Carolina in 1964, The Secret Life of Bees tells the story of Lily Owens, whose life has been shaped around the blurred memory of the afternoon her mother was killed. When Lily’s fierce-hearted black “stand-in mother,” Rosaleen, insults three of the deepest racists in town, Lily decides to spring them both free. They escape to Tiburon, South Carolina–a town that holds the secret to her mother’s past. Taken in by an eccentric trio of black beekeeping sister, Lily is introduced to their mesmerizing world of bees and honey, and the Black Madonna. This is a remarkable novel about divine female power, a story that women will share and pass on to their daughters for years to come.”

2. The Prince of Tides by Pat Conroy 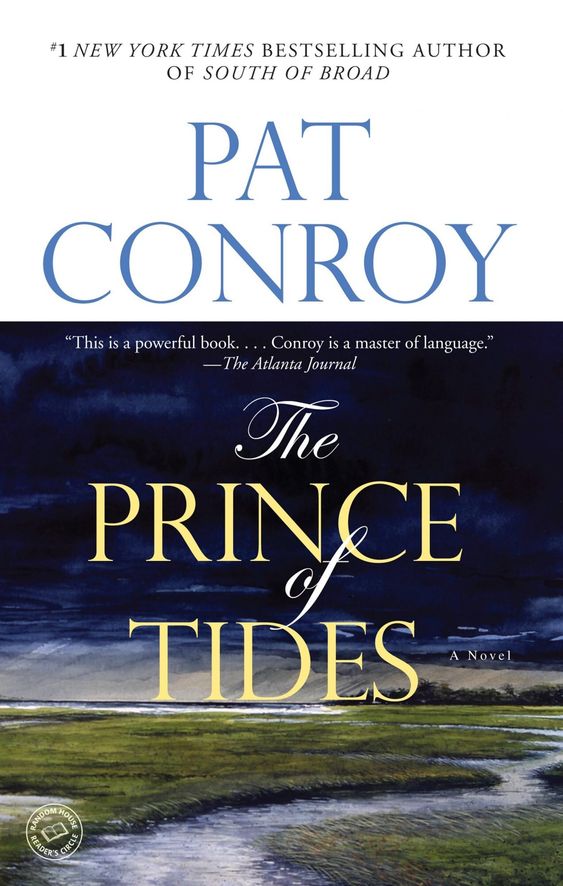 “Pat Conroy’s classic novel stings with honesty and resounds with drama. Spanning forty years, it’s the story of turbulent Tom Wingo, his gifted and troubled twin sister, Savannah, and their struggle to triumph over the dark and tragic legacy of the extraordinary family into which they were born. Filled with the vanishing beauty of the South Carolina Low Country as well as the dusty glitter of New York City, The Prince of Tides showcases an American original at his very best.”

Bonus: Don’t miss Conroy’s The Lords of Discipline, The Great Santini, and The Water Is Wide.

3. Bastard Out of Carolina by Dorothy Allison 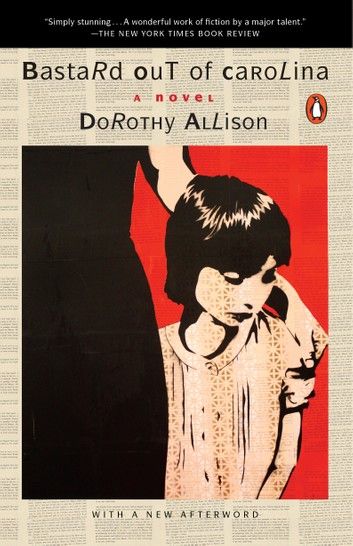 “Greenville County, South Carolina, is a wild, lush place that is home to the Boatwright family – a tight-knit clan of rough-hewn, hard- drinking men who shoot up each other’s trucks, and indomitable women who get married young and age too quickly. At the heart of this story is Ruth Anne Boatwright, known simply as Bone, a bastard child who observes the world around her with a mercilessly keen perspective. When her stepfather, Daddy Glen, “cold as death, mean as a snake”, becomes increasingly more vicious toward her, Bone finds herself caught in a family triangle that tests the loyalty of her mother, Anney – and leads to a final, harrowing encounter from which there can be no turning back.”

4. The House on Tradd Street by Karen White “Practical Melanie Middleton hates to admit she can see ghosts. But she’s going to have to accept it. An old man she recently met has died, leaving her his historic Tradd Street home, complete with housekeeper, dog—and a family of ghosts anxious to tell her their secrets.

“Enter Jack Trenholm, a gorgeous writer obsessed with unsolved mysteries. He has reason to believe that diamonds from the Confederate Treasury are hidden in the house. So he turns the charm on with Melanie, only to discover he’s the smitten one…

“It turns out Jack’s search has caught the attention of a malevolent ghost. Now, Jack and Melanie must unravel a mystery of passion, heartbreak—and even murder.” 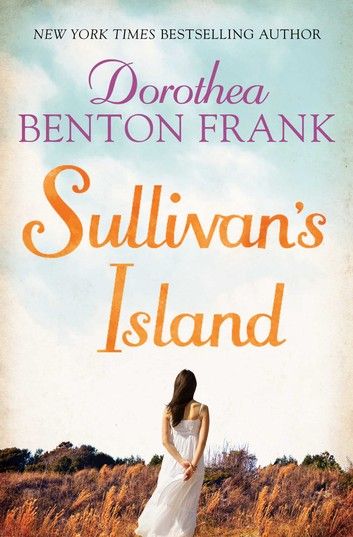 “Born and raised on idyllic Sullivan’s Island, Susan Hayes navigated through her turbulent childhood with humor, spunk, and characteristic Southern sass. But years later, she is a conflicted woman with an unfaithful husband, a sometimes resentful teenage daughter, and a heart that aches with painful, poignant memories. And as Susan faces her uncertain future, she realizes that she must go back to her past. To the beachfront house where her sister welcomes her with open arms. To the only place she can truly call home…”

Bonus: Don’t miss Porch Lights and By Invitation Only. 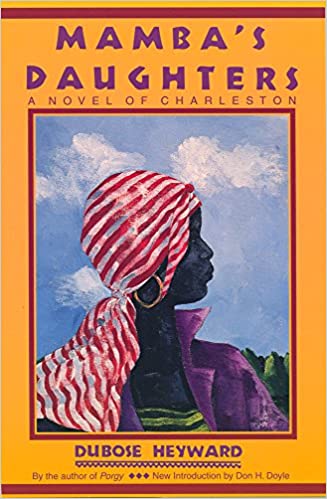 “When Mamba appears on the Wentworth doorstep, this shrewd woman takes the first step in surmounting a social barrier as thorny as any in early twentieth-century Charleston. For the sake of her family, Mamba navigates a comic, calculated path to the privileged class of African-Americans employed by Charleston’s aristocratic white families.” 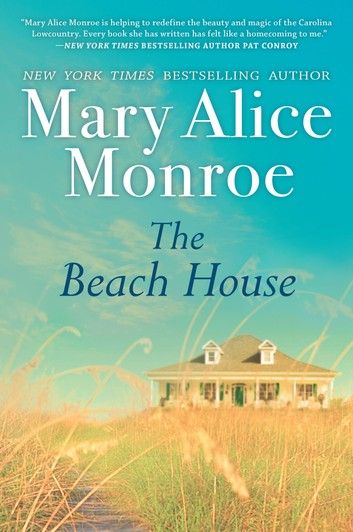 “Caretta Rutledge thought she’d left her Southern roots and troubled family far behind. But an unusual request from her mother—coming just as her own life is spinning out of control—has Cara heading back to the scenic Lowcountry of her childhood summers. Before long, the rhythms of the island open her heart in wonderful ways as she repairs the family beach house, becomes a bona fide “turtle lady” and renews old acquaintances long thought lost. But it is in reconnecting with her mother that she will learn life’s most precious lessons—true love involves sacrifice, family is forever and the mistakes of the past can be forgiven.”

8. Saints at the River by Ron Rash 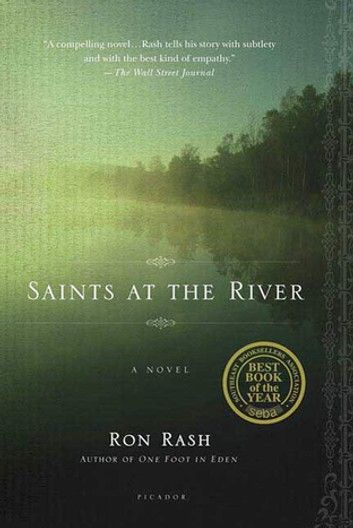 “When a twelve-year-old girl drowns in the Tamassee River and her body is trapped in a deep eddy, the people of the small South Carolina town that bears the river’s name are thrown into the national spotlight. The girl’s parents want to attempt a rescue of the body; environmentalists are convinced the rescue operation will cause permanent damage to the river and set a dangerous precedent. Torn between the two sides is Maggie Glenn, a twenty-eight-year-old newspaper photographer who grew up in the town and has been sent to document the incident. Since leaving home almost ten years ago, Maggie has done her best to avoid her father, but now, as the town’s conflict opens old wounds, she finds herself revisiting the past she’s fought so hard to leave behind. Meanwhile, the reporter who’s accompanied her to cover the story turns out to have a painful past of his own, and one that might stand in the way of their romance.” 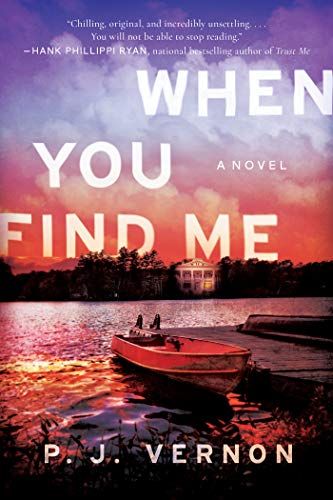 “Visiting her family’s South Carolina estate, socialite Gray Godfrey wakes from a night out to an empty bed. Her husband Paul is gone and a thrashing hangover has wiped her memory clean. At first, she’s relieved for the break from her tumultuous marriage; perhaps Paul just needed some space. But when his car is found abandoned on the highway, Gray must face the truth: Paul is gone. And Gray may not want him found.” 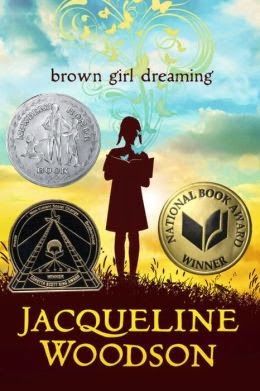 “Raised in South Carolina and New York, Woodson always felt halfway home in each place. In vivid poems, she shares what it was like to grow up as an African American in the 1960s and 1970s, living with the remnants of Jim Crow and her growing awareness of the Civil Rights movement. Touching and powerful, each poem is both accessible and emotionally charged, each line a glimpse into a child’s soul as she searches for her place in the world. Woodson’s eloquent poetry also reflects the joy of finding her voice through writing stories, despite the fact that she struggled with reading as a child. Her love of stories inspired her and stayed with her, creating the first sparks of the gifted writer she was to become.”