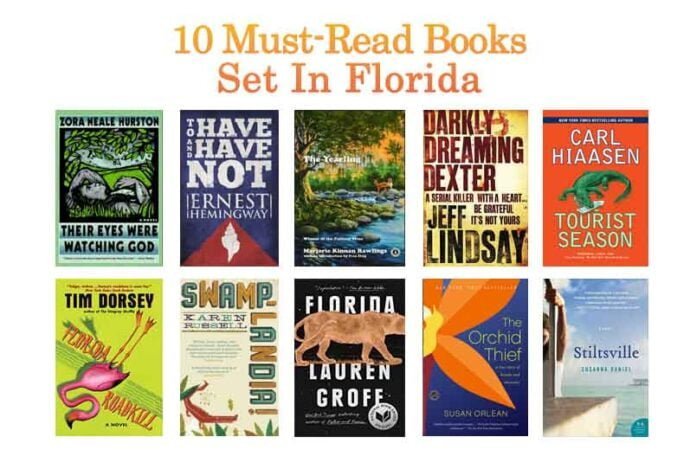 These 10 must-read books set in Florida will transport you to rural Florida, exotic South Florida, the swamps of Florida, the vibrant city of Miami, and more. Visit The Sunshine State with these books that take place in Florida.

1. Their Eyes Were Watching God by Zora Neale Hurston 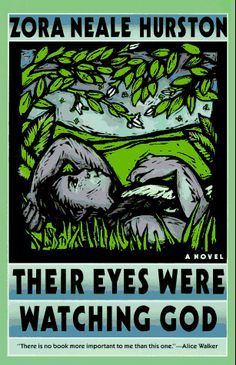 Set primarily in Eatonville, Florida. “One of the most important and enduring books of the twentieth century, Their Eyes Were Watching God brings to life a Southern love story with the wit and pathos found only in the writing of Zora Neale Hurston.”

2. To Have and Have Not by Ernest Hemingway 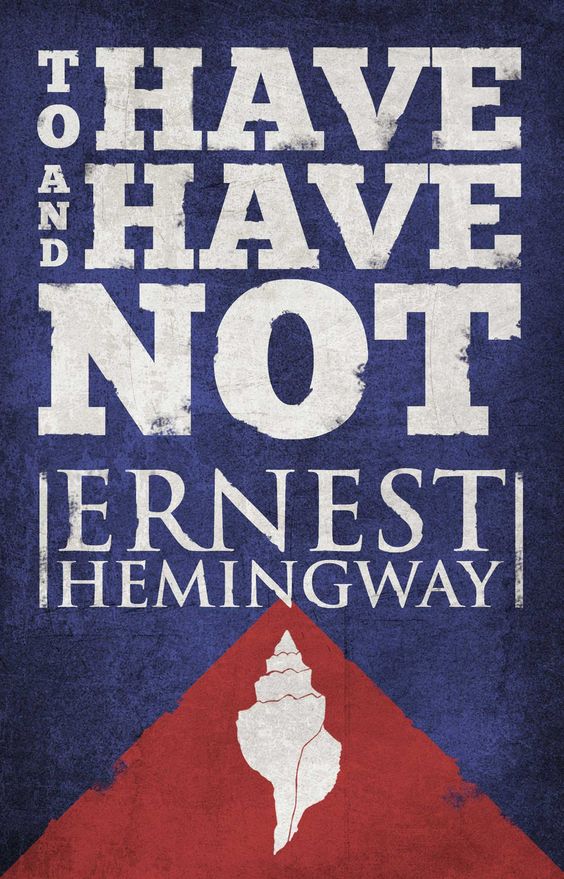 “To Have and Have Not is the dramatic story of Harry Morgan, an honest man who is forced into running contraband between Cuba and Key West as a means of keeping his crumbling family financially afloat. His adventures lead him into the world of the wealthy and dissipated yachtsmen who throng the region and involve him in a strange and unlikely love affair.”

3. The Yearling by Marjorie Kinnan Rawlings 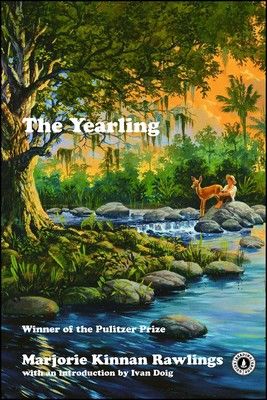 “No novel better epitomizes the love between a child and a pet than The Yearling. Young Jody adopts an orphaned fawn he calls Flag and makes it a part of his family and his best friend. But life in the Florida backwoods is harsh, and so, as his family fights off wolves, bears, and even alligators, and faces failure in their tenuous subsistence farming, Jody must finally part with his dear animal friend.” 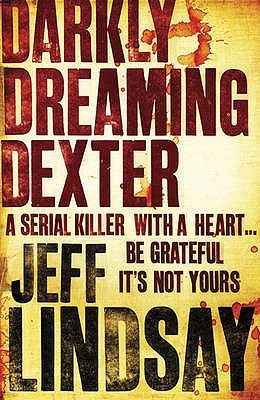 “Meet Dexter Morgan, a polite wolf in sheep’s clothing. He’s handsome and charming, but something in his past has made him abide by a different set of rules. He’s a serial killer whose one golden rule makes him immensely likeable: he only kills bad people. And his job as a blood splatter expert for the Miami police department puts him in the perfect position to identify his victims. But when a series of brutal murders bearing a striking similarity to his own style start turning up, Dexter is caught between being flattered and being frightened–of himself or some other fiend.” 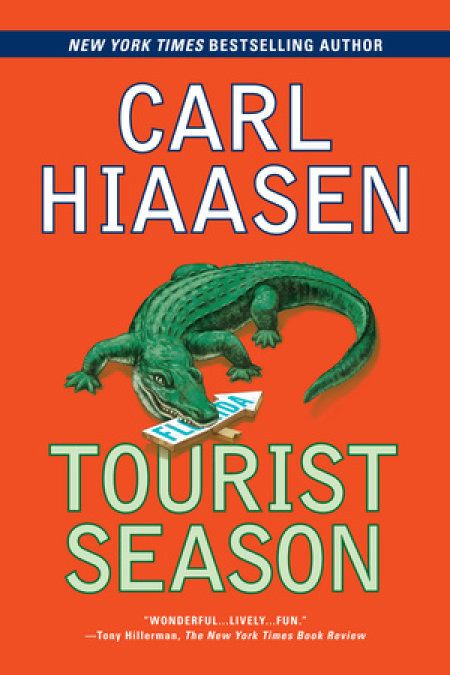 “Take a trip to exotic South Florida with this dark, funny book that established Carl Hiaasen as one of the top mystery writers in the game.” 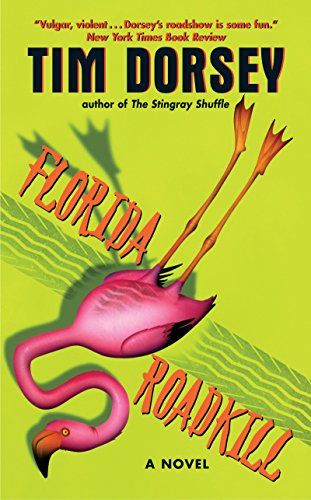 “Sunshine State trivia buff Serge A. Storms loves eliminating jerks and pests. His drug-addled partner Coleman loves cartoons. Hot stripper Sharon Rhodes loves cocaine, especially when purchased with rich dead men’s money. On the other hand, there’s Sean and David, who love fishing and are kind to animals — and who are about to cross paths with a suitcase filled with $5 million in stolen insurance money. Serge wants the suitcase. Sharon wants the suitcase. Coleman wants more drugs . . . and the suitcase. In the meantime, there’s murder by gun, Space Shuttle, Barbie doll, and Levi’s 501s. In other words, welcome to Tim Dorsey’s Florida — where nobody gets out unscathed and untanned!” 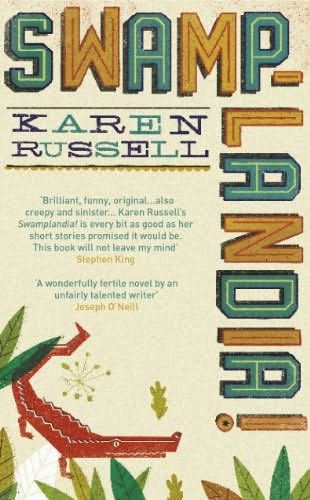 “Thirteen-year-old Ava Bigtree has lived her entire life at Swamplandia!, her family’s island home and gator-wrestling theme park in the Florida Everglades. But when illness fells Ava’s mother, the park’s indomitable headliner, the family is plunged into chaos; her father withdraws, her sister falls in love with a spooky character known as the Dredgeman, and her brilliant big brother, Kiwi, defects to a rival park called The World of Darkness.” “The stories in this collection span characters, towns, decades, even centuries, but Florida—its landscape, climate, history, and state of mind—becomes its gravitational center: an energy, a mood, as much as a place of residence. Groff transports the reader, then jolts us alert with a crackle of wit, a wave of sadness, a flash of cruelty, as she writes about loneliness, rage, family, and the passage of time. With shocking accuracy and effect, she pinpoints the moments and decisions and connections behind human pleasure and pain, hope and despair, love and fury—the moments that make us alive. Startling, precise, and affecting, Florida is a magnificent achievement.”

9. The Orchid Thief by Susan Orlean 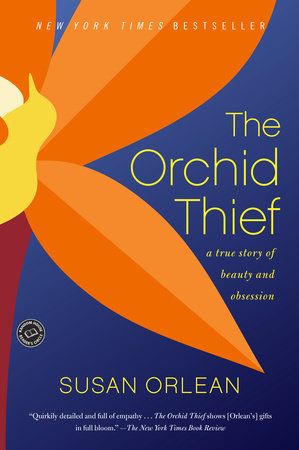 “A modern classic of personal journalism, The Orchid Thief is Susan Orlean’s wickedly funny, elegant, and captivating tale of an amazing obsession. Determined to clone an endangered flower—the rare ghost orchid Polyrrhiza lindenii—a deeply eccentric and oddly attractive man named John Laroche leads Orlean on an unforgettable tour of America’s strange flower-selling subculture, through Florida’s swamps and beyond, along with the Seminoles who help him and the forces of justice who fight him. In the end, Orlean—and the reader—will have more respect for underdog determination and a powerful new definition of passion.” 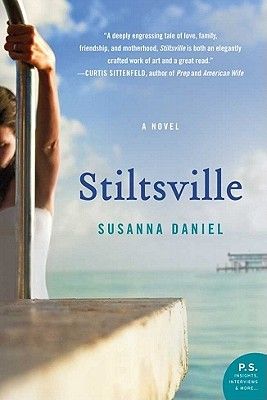 “Against a vivid South Florida background, Susanna Daniel’s Stiltsville offers a gripping, bittersweet portrait of a marriage—and a romance—that deepens over the course of three decades. Called ‘an elegantly crafted work of art and a great read’ by Curtis Sittenfeld (American Wife, Prep) Stiltsville is a stunningly assured debut novel sure to appeal to readers of Anita Shreve, Sue Miller, and Annie Dillard, or anyone enchanted by the sultry magic of Miami.”