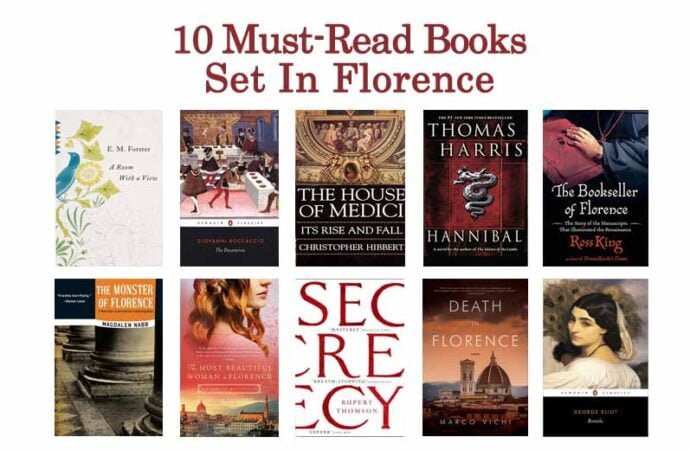 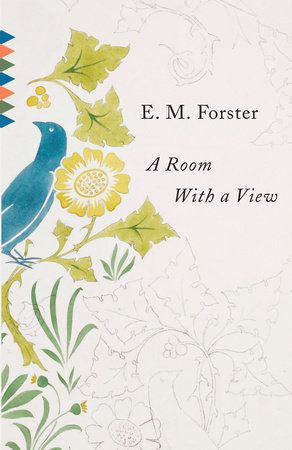 “A Room with a View is a social comedy set in Florence, Italy, and Surrey, England. Its heroine, Lucy Honeychurch, struggling against straitlaced Victorian attitudes of arrogance, narrow-mindedness and snobbery, falls in love – while on holiday in Italy – with the socially unsuitable George Emerson. Caught up in a claustrophobic world of pretentiousness and rigidity, Lucy ultimately rejects her fiancé, Cecil Vyse, and chooses, instead, to wed her true love, the young man whose sense of freedom and lack of artificiality became apparent to her in the Italian pensione where they first met.”

2. The Decameron by Giovanni Boccaccio “In the summer of 1348, as the Black Death ravages their city, ten young Florentines take refuge in the countryside. They amuse themselves by each telling a story a day for the ten days they are destined to remain there—a hundred stories of love, adventure and surprising twists of fate. Less preoccupied with abstract concepts of morality or religion than with earthly values, the tales range from the bawdy Peronella hiding her lover in a tub to Ser Cepperello, who, despite his unholy effrontery, becomes a Saint. The result is a towering monument of European literature and a masterpiece of imaginative narrative.”

3. The Rise and Fall of the House of Medici by Christopher Hibbert 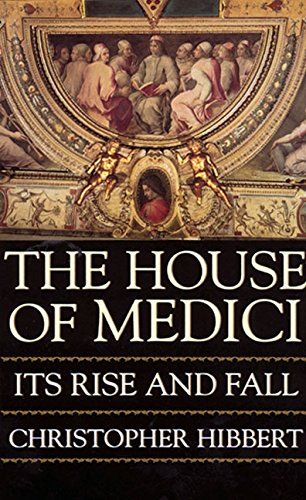 “At its height Renaissance Florence was a centre of enormous wealth, power and influence. A republican city-state funded by trade and banking, its often bloody political scene was dominated by rich mercantile families, the most famous of which were the Medici. This enthralling book charts the family’s huge influence on the political, economic and cultural history of Florence. Beginning in the early 1430s with the rise of the dynasty under the near-legendary Cosimo de Medici, it moves through their golden era as patrons of some of the most remarkable artists and architects of the Renaissance, to the era of the Medici Popes and Grand Dukes, Florence’s slide into decay and bankruptcy, and the end, in 1737, of the Medici line.” 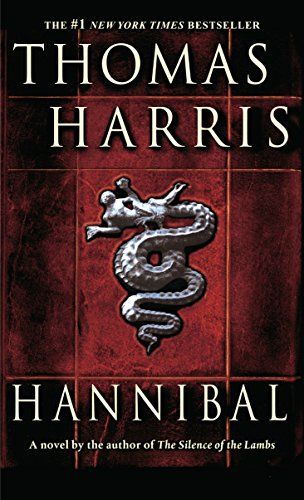 “You remember Hannibal Lecter: gentleman, genius, cannibal. Seven years have passed since Dr. Lecter escaped from custody. And for seven years he’s been at large, free to savor the scents, the essences, of an unguarded world. But intruders have entered Dr. Lecter’s world, piercing his new identity, sensing the evil that surrounds him. For the multimillionaire Hannibal left maimed, for a corrupt Italian policeman, and for FBI agent Clarice Starling, who once stood before Lecter and who has never been the same, the final hunt for Hannibal Lecter has begun. All of them, in their separate ways, want to find Dr. Lecter. And all three will get their wish. But only one will live long enough to savor the reward. . . .”

5. The Bookseller of Florence by Ross King 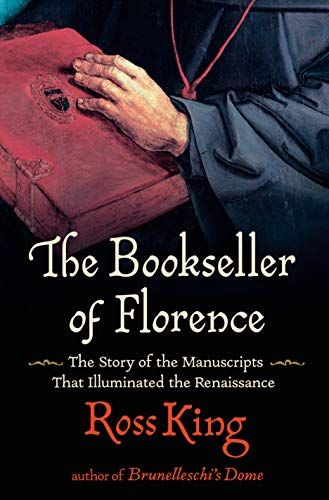 “A thrilling chronicle of intellectual ferment set against the dramatic political and religious turmoil of the era, Ross King’s brilliant The Bookseller of Florence is also an ode to books and bookmaking that charts the world-changing shift from script to print through the life of an extraordinary man long lost to history—one of the true titans of the Renaissance.”

6. The Monster of Florence by Magdalen Nabb 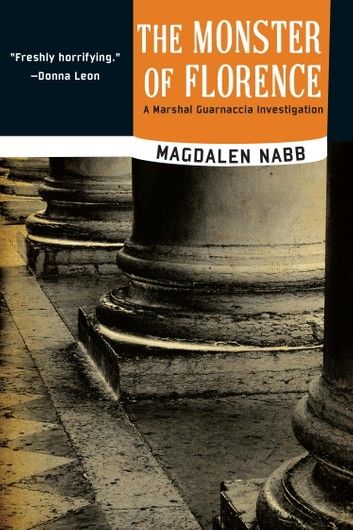 “Based on a chilling true crime, The Monster of Florence follows the reopening of a cold case—a serial killer who terrorized Florence for two decades.”

7. The Most Beautiful Woman in Florence by Alyssa Palombo 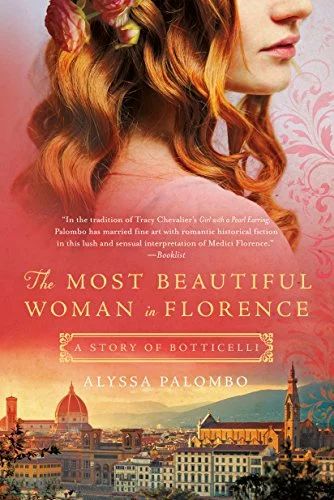 “In the tradition of Tracy Chevalier’s Girl with a Pearl Earring, Palombo has married fine art with romantic historical fiction in this lush and sensual interpretation of Medici Florence, artist Sandro Botticelli, and the muse that inspired them all.” – Booklist 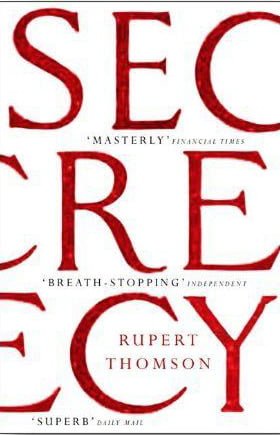 “Zummo – a 17th-century prodigy and creator of figures so realistic they look as though they might draw breath – has spent his life fleeing his past. Summoned to the Medici court by the Grand Duke, a man of holy devotions and hidden longings, Zummo finds himself in a city riddled with hypocrisy and contradictions, where adulterers are publicly flogged, while within the palace walls members of the court indulge their nefarious pleasures. Commissioned by the Grand Duke to sculpt a life-size Venus from wax, Zummo scours the streets for inspiration. But 1690s Florence is a place of unforseen dangers and secrets still more devastating than his own, and when a young woman’s body is found on the banks of the Arno, Zummo suspects that the source of vice has its bed in the Medici court. As he proceeds with his creation, he begins to wonder whether this perfect woman will be his salvation or his downfall. Set in a Florence blighted by corruption and austerity, Secrecy is a tour de force of whispered pleasures and startling revelations. It is a scintillating, breathtaking read from a novelist at the height of his powers.”

9. Death in Florence by Marco Vichi 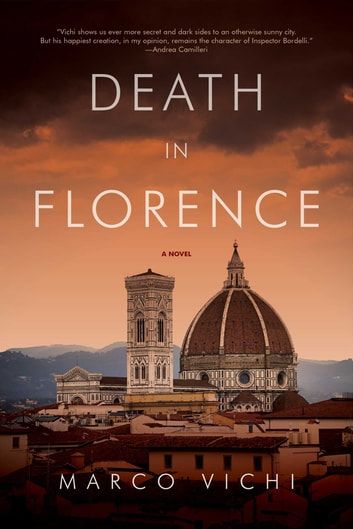 “Florence, October 1966. When a young boy vanishes, the police fear the worst, which brings Inspector Bordelli into an increasingly desperate investigation, in the new mystery from critics’ favorite Marco Vichi.” 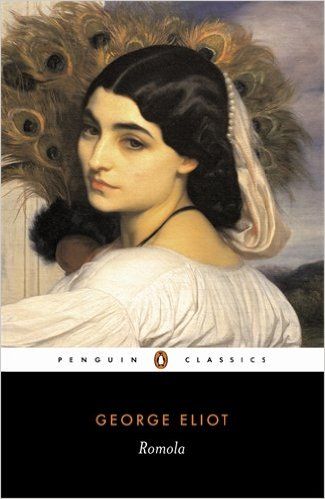 “One of George Eliot’s most ambitious and imaginative novels, Romola is set in Renaissance Florence during the turbulent years following the expulsion of the powerful Medici family during which the zealous religious reformer Savonarola rose to control the city. At its heart is Romola, the devoted daughter of a blind scholar, married to the clever but ultimately treacherous Tito whose duplicity in both love and politics threatens to destroy everything she values, and she must break away to find her own path in life. Described by Eliot as ‘written with my best blood’, the story of Romola’s intellectual and spiritual awakening is a compelling portrayal of a Utopian heroine, played out against a turbulent historical backdrop.”